Following the events of the First War, the survivors of Stormwind led by Anduin Lothar made their way through the Great Sea to the northern kingdom of Lordaeron to beseech aid from King Terenas Menethil II. Following Lothar's impassioned speech, Terenas called for an emergency council of war to discuss the Orcish threat. Meanwhile, the Orcish Horde pillaged Stormwind city and the surrounding areas, effectively destroying all human holdings south of the Burning Steppes.

In the years between the defeat of the Kingdom of Azeroth and the outbreak of the Second War, it can only be assumed that both the Horde and Alliance went through massive reformations and began huge military build-ups in preparation for war.

King Terenas, through skilled political maneuvering, enlisted the support of the human kingdoms of Gilneas, Stromgarde, Dalaran, Alterac, and Kul Tiras. They also managed to gain the allegiance of the Bronzebeard Dwarves of Ironforge, the Wildhammer Dwarves of Aerie Peak, and the Gnomes of Gnomeregan. Envoys led by King Terenas attempted to gain the allegiance of the High Elves of Quel'Thalas, though initially they were uninterested in the coming conflict and sent merely a pittance of their forces at first. However, after the Horde's destruction of a sacred Elven monolith at Caer Darrow, the High Elves joined King Terenas's cause fully, pledging their rangers and navy to the war. This resulted in the creation of the Old Alliance, the Alliance of Lordaeron.

In the last days of the First War, the leader of the Shadow Council, the Warlock Gul'dan fell into a deep coma attempting to probe the mind of Medivh. Without the machinations of the Shadow Council, the Horde fell prey to infighting. In a coup d'état led by Orgrim Doomhammer to end what he saw as a corrupting influence over the Horde, the Shadow Council was destroyed as well as its puppet Warchief, Blackhand the Destroyer. Doomhammer successfully took control of the remaining Horde forces and began to bolster their devastated armies with orcs and ogres from beyond the Dark Portal. With trolls, ogres and orcs fighting side by side, it was not long before the enterprising goblins saw the potential profit in aiding them. The Horde gained support from Goblin machinists and mercenaries, and through use of the Demon Soul managed to enslave the Red Dragon Alexstrasza and the majority of her brood. It is unknown what relationship the Horde had with the Troll tribes of Stranglethorn Vale, however they did not join forces with the Horde and stayed apart from the Second War. Upon awakening from his coma and finding himself without allies, Gul'dan "swore" allegiance to Doomhammer and began creation of the first death knights in the service of the Warchief. This was the beginning of the so-called Horde.
Top

In the 6th year after the fall of Stormwind, the Horde began their northern offensive against the Alliance forces. The Horde simultaneously launched two primary assaults. The first was a land offensive launched out of Blackrock Mountain which moved north to the Dwarf holdings in Khaz Modan. The second was a naval assault launched from the ruins of Stormwind, which sailed north taking the islands of Zul'dare, Tol Barad, and Crestfall and establishing them as primary naval bases. From these launching points, the Horde landed troops along the coasts of the Wetlands, the Arathi Highlands, and most importantly the southern coast of Lordaeron. Southern outposts such as Southshore, Tarren Mill and Hillsbrad were assaulted, and the Horde squeezed a large amount of troops into Lordaeron this way, assisted by the nation of Alterac who provided them with maps and secret routes.

Soon after, Zul'Jin and some of his champions were discovered by Horde scouts in a makeshift prison near Tarren Mill. Upon hearing the news, Doomhammer immediately ordered his release from the raid party that captured him. Now in Doomhammer's debt, Zul'Jin agreed to form a pact with the orcish Horde: the plains and valleys of Lordaeron would belong to the Horde, while the trolls would take back their ancestral forests from their mortal enemies, the high elves.

The Horde's land assault proceeded to lay waste to Loch Modan, pushing the outnumbered Dwarf and Gnome forces into the city of Ironforge, who sealed themselves from the outside threat. The Bleeding Hollow Clan attempted several raids on the mighty dwarven city, to no avail. For the most part, Dwarves and Gnomes were cut off from the rest of the Alliance, save through air support. Following the ravaging of Loch Modan, the Horde pushed farther north into the Wetlands, taking Dun Algaz, Dun Modr, and Grim Batol and converting them into fortresses for the Horde. Grim Batol became the primary base for the land offensive, and was also converted into a hatchery for the enslaved red dragonflight. Thandol Span was a pivotal battleground in the Second War, constantly shifting in possession between the two factions.

Finally, owing to a diversion of Lothar's main army at Aerie Peak, the Horde succeeded in penetrating Quel'Thalas through the cliffs undetected. Together with the entirety of the Amani tribe under Zul'Jin, Doomhammer's troops slashed and burned their way through the elven forests, and made it as far as Eversong Woods before the Alliance reinforcements could arrive.

Brief counterattacks from the Alliance

Outraged at the attack of the horde offensive on their borders, the Elves finally put forth their full strength in the war effort. This included the deployment of Elven Destroyers south to the Hinterlands and to the shores of Lordaeron. High Commander Anduin Lothar decided to split his army in order to out manuever the Horde. He left half of his army, under command of his second in command, to destroy the Horde threat in the Elven Forests, while Lothar's half would stay in the Hinterlands to destroy the large number of Horde still remaining there. Lordaeron and Quel'Thalas managed to push back the majority of Horde forces to the shores of Hillsbrad, but not before Gul'dan was able to acquire High Elven runestones to use in his effort to create Ogre-magi for the war effort. With support from the Elves, the Alliance was able to launch an attack on Zul'dare and end the invasion of Lordaeron. Though Hillsbrad and Southshore were nearly obliterated, the Horde navies were driven back, presumably to the shores of the Wetlands, Crestfall, and the ruins of Stormwind.

Following the victory in the north, the Alliance concentrated on pushing back the ground offensive on the edge of the Arathi Highlands on the great bridges of the Thandol Span. The first step was a bloody retaking of the Horde fortress on Tol Barad for use as a staging point for an invasion upon Dun Modr, the primary base of support for the attacks upon the Thandol Span. With naval support from Tol Barad, the Alliance ground forces were finally able to push across the Thandol Span and reclaim Dun Modr. The Alliance continued to push south, taking the base at Dun Algaz. Though they were unable to completely take the cursed fortress of Grim Batol, they effectively shattered the armies of the Horde and causing them to retreat from Khaz Modan.

After the defeat of the Horde forces in Khaz Modan, a brief pause in open combat ensued. The Horde attempted to gather more troops from the south, including the newly completed Death Knights. The Alliance began to turn their sights northward to the remnants of the Horde forces in northern Lordaeron, and to that end they sent Uther Lightbringer and his newly formed Knights of the Silver Hand to lend aid to the victims of the war. However, a minor peasant riot in Tyr's Hand led to a discovery of a plot from Lord Perenolde of Alterac, who was attempting to destroy the Alliance from within. Learning of Alterac's plots, the Alliance forces obliterated the small, treacherous kingdom

The Siege of Lordaeron

Alterac's betrayal had let the entire Horde army through to the walls of Lordaeron, and they began sieging the capital. Troops from Stromgarde cut off all remaining Horde reinforcements in Alterac and imprisoned Perenolde for his treason. The whole of the Alliance army converged on the Horde, but were unable to defeat them at first.

Meanwhile, Gul'dan took the Stormreaver and Twilight's Hammer Clans to the location of the Tomb of Sargeras in an attempt to raise the Tomb from the sea and claim the demonic powers for his own. It was foolish of him to try however because both clans, including Gul'dan, were annihilated by the demons inside. Meanwhile, Doomhammer withdrew his forces to pursue Gul'dan in order to keep them from dishonoring the Horde. The Alliance jumped on this opportunity and proceeded to mop up the horde's remaining standing troops in Lordaeron, who were in shambles and without air support. The Stormreaver and Twilight's Hammer Clan were destroyed by Doomhammer's forces. The mage Rhonin also led a small contingent of Alliance warriors and succeeded in destroying the Demon Soul as well as its keeper, the warlock called Nekros. After being freed Alexstraza, enraged, slaughtered many of the orcs that had enslaved her and her red dragonflight. 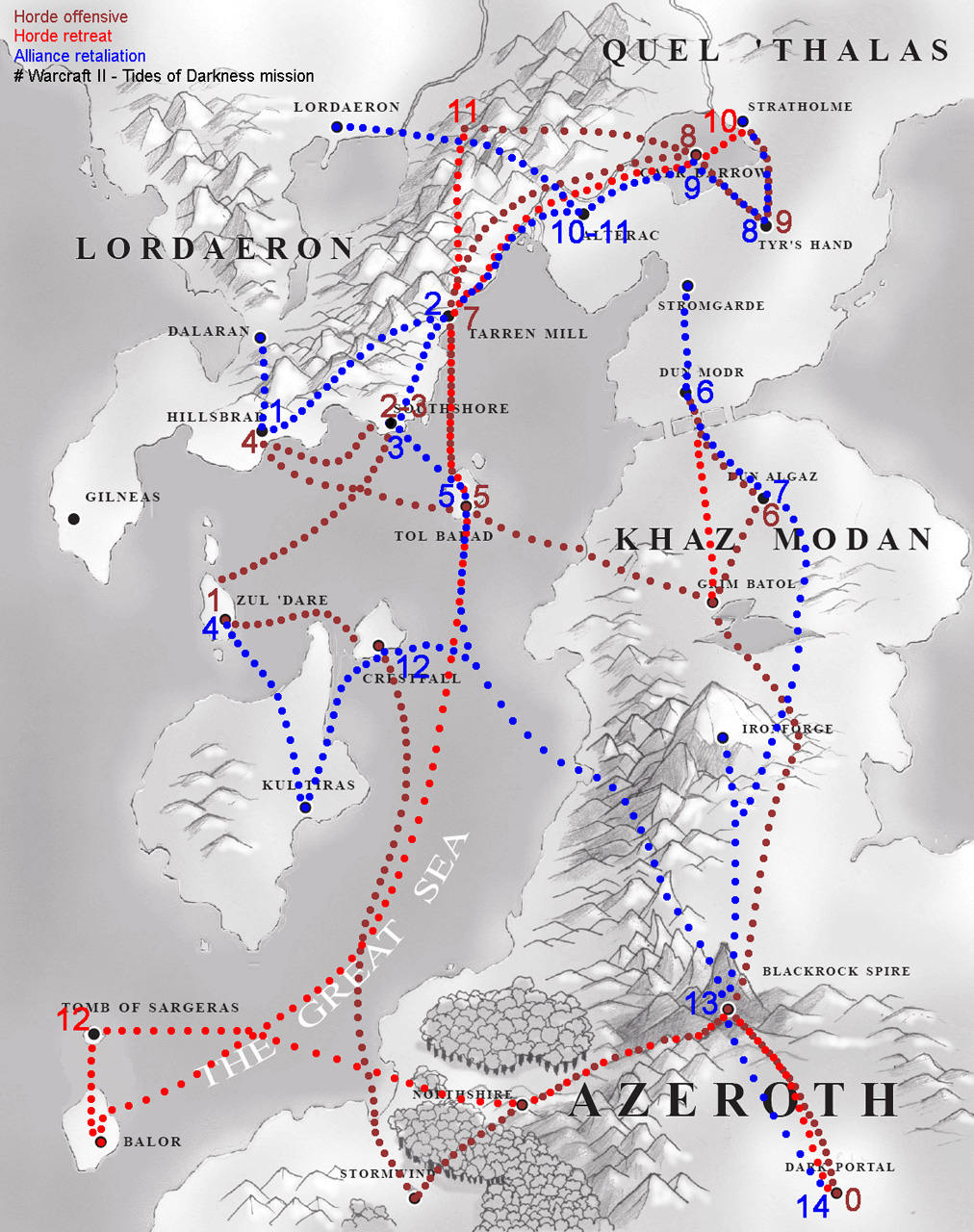 With the Horde forces thus weakened, the Alliance laid siege to the fortress of Blackrock. In order to break the siege, Doomhammer and what followers he had left charged out of the Spire and attacked Lord Lothar and his Paladins. After a titanic duel, Doomhammer narrowly managed to kill Lord Lothar. Upon his death, Lothar's second-in-command, the Paladin Turalyon took command, bested Doomhammer and made him his prisoner, and chased the retreating orcs to their last bastion of power, the Dark Portal.

Ragged and broken, the remaining Horde forces attempted a defense of the Dark Portal. In what has been described as the bloodiest battle of the Second War, the orcs were finally defeated, their leaders rounded up, and Doomhammer himself had been taken in chains. Shortly thereafter, the wizard Khadgar, flanked by the brave warriors of the Alliance, destroyed the Dark Portal. With the destruction of the Dark Portal, the Second War was ended
Top

Re: The second war

Re: The second war