Btw, the one with the pencil drill and the scoundrel imp... that reminds me of the original 'Spy vs Spy' from Mad magazine. That is VERY old (50s?). Check it out.
Top

Spy Vs Spy is indeed pretty old. However, they were still around in the 70's and begin 80's and were featured in the MAD magazine.
Back on topic: Xantros, you make great progress, that is clear to see! Must have been a lot of work too, so many characters. The longer I look, the more funny things I see! :-)

In true drunkard-fashion, the Dwarf managed to keep his bottle up-right, so not to spill his beer! Even though he has passed out! Lol!
Top

Thank you so much for all the support and comments :)

Wow, that Spy vs Spy, I remember having seen it but it was such a while ago. I see what you mean Merikkinon :D

Mantigora: Funny how that dwarf turned out. I was actually gonna make him spill the drink but I forgot about it. Then when I looked again I thought... nah this is good :D
Top 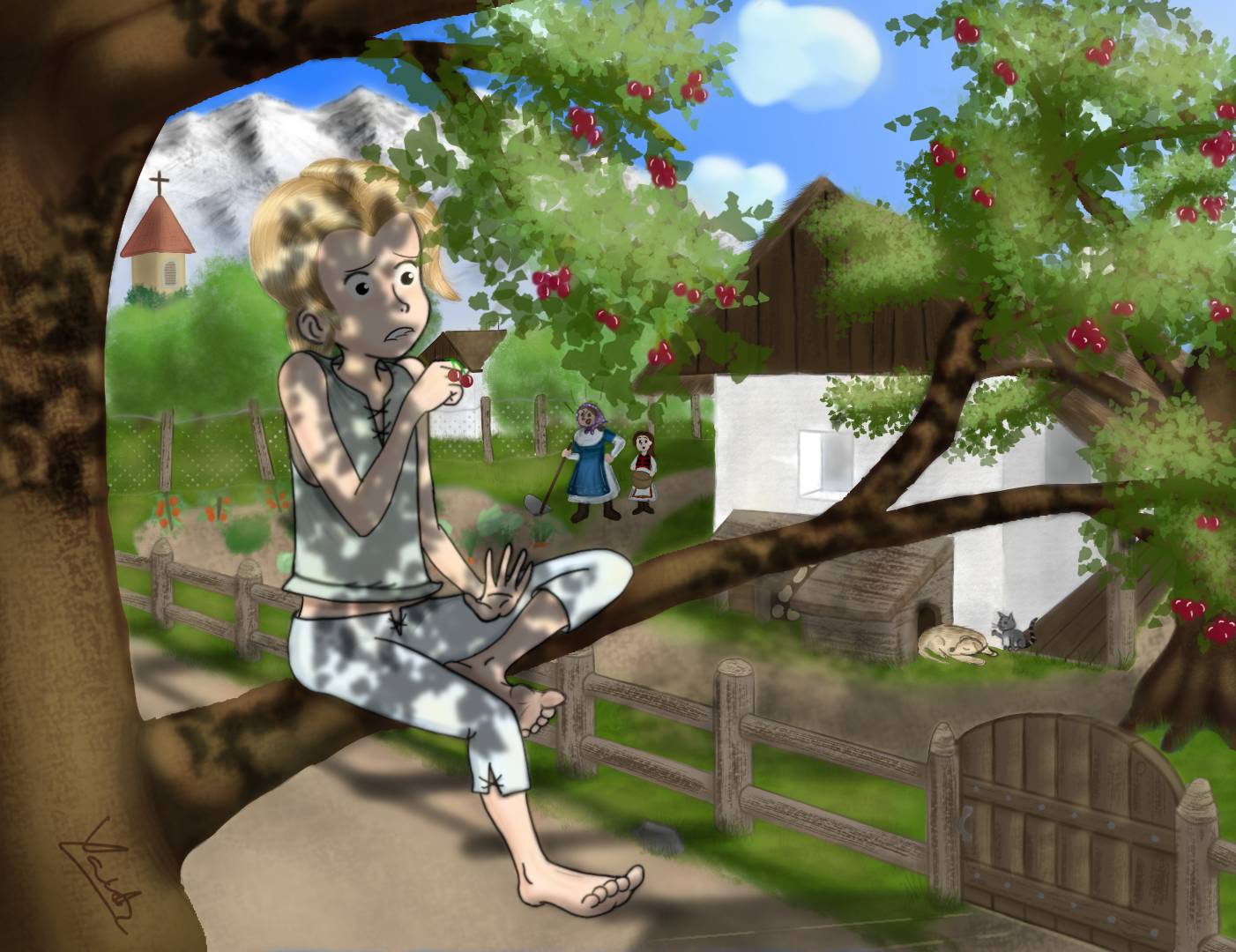 This was an older, unfinished piece, with a different style that I felt I should do something with. First time practicing lighting, color art and shadows for real. Hope you like it.

Very nice one. I like the cat doing cat things. :)
Top

haha I was hoping the cat was noticeable :D
Top

Yes, poor dog!
I like the rural look of the background. It could well be used as a design in a (childrens)story.
Top 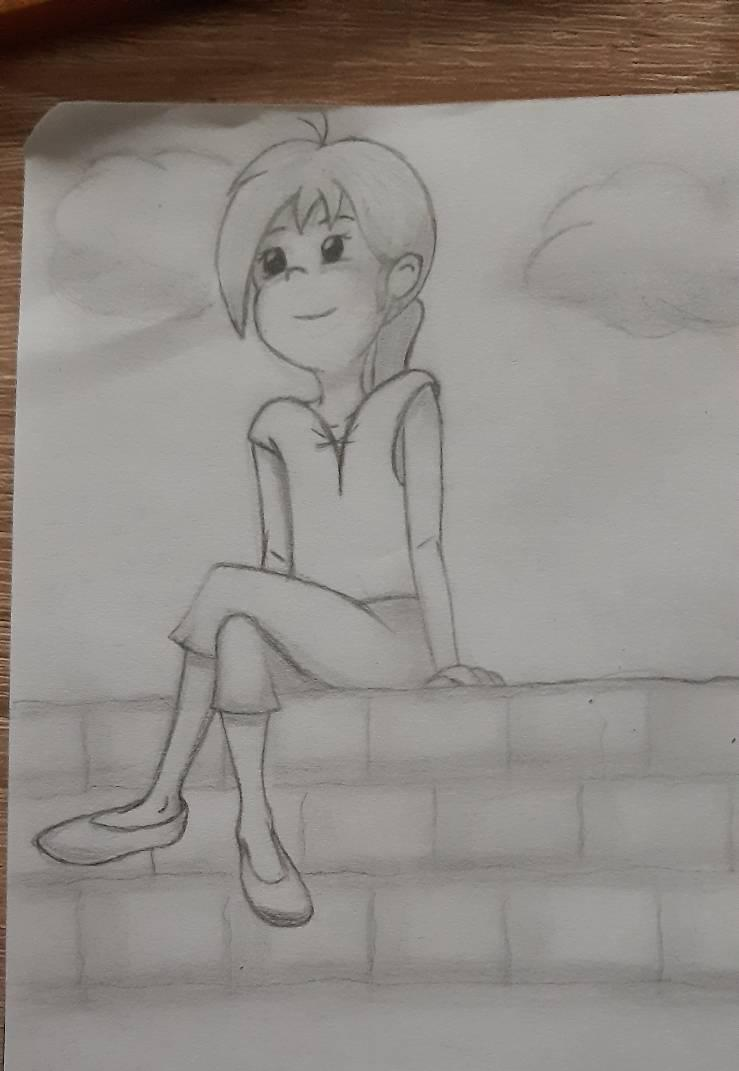 A little sketch I made in my sketchbook while on vacation. Keep on dreaming... 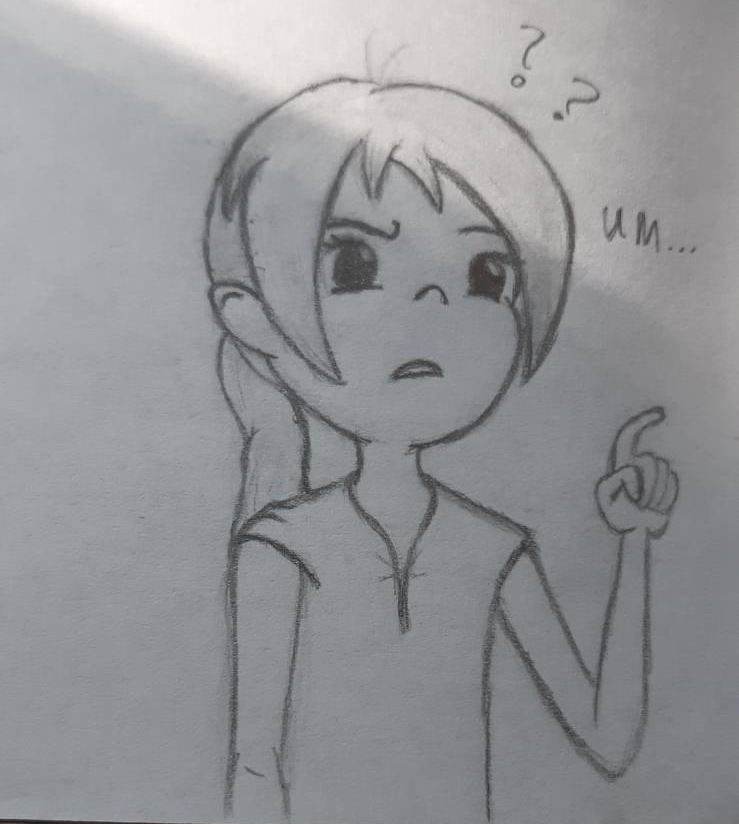 When you wanna answer but you realize you didn't understand the question in the first place...

When s1 asks u a stupid question and u find urself troubled cause u don't know how to react respectfully?
Top

And you stop yourself before reacting. Works for that too haha
Top

A small bit of context: My friend Mantigora came up with this funny idea for one of my characters "Lem" to get assaulted by a Defias Snuggler and Hooter. We had a good laugh at the wordplay and so I thought I will draw it. hehe

I also included some flavor text below. I will be uploading some writings of my own soon. Hope you enjoy my humble creations. 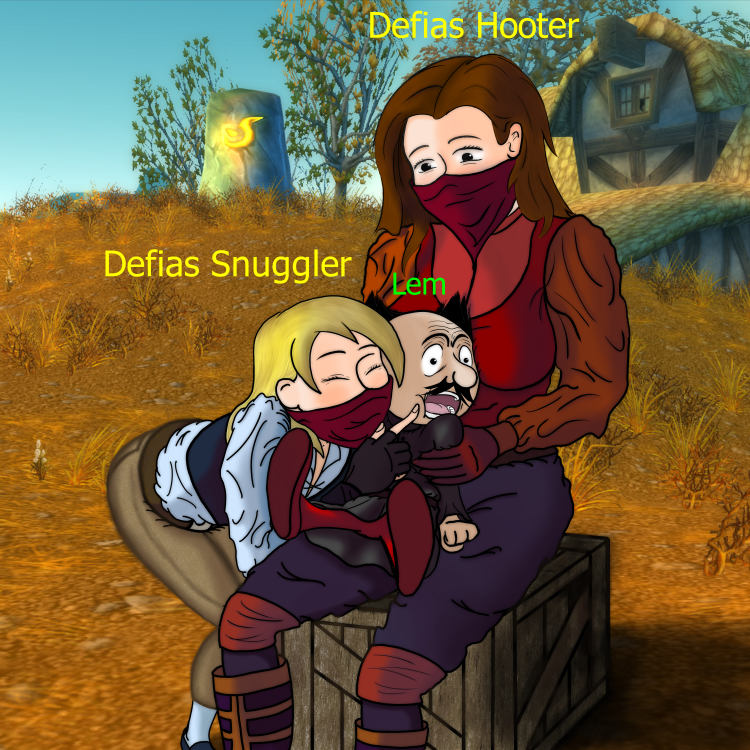 It was a hot and stuffy afternoon in Westfall. Swarms of flies buzzed around rotten pumpkins in the heat and lonely vultures scanned the horizon for their next carrion meal.
A large murder of crows were also gathering on the few trees that remained in the decrepit rural scenery, waiting to be the last to abandon the once proud "Pantry of Stormwind".
Despite the drear and gloom of decrepit mills and lonely scarecrows, the orange light of the setting sun somehow gave the farmlands a pleasant glow.
One could almost catch the smell of fallen leaves carried on the breeze from nearby forests and taste the crumbly chestnut pie... with just a pinch of cinnamon.
But that was many summers ago and today was now the last day of this year's summer.

Somewhere deep in the backdrop of empty fields and dead crops, behind the old town of Moonbrook, a lone gnome wandered, grumbling to himself.
"Now where did she wander off to again?" he scratched his balding head.
The gnome in question was none other than "Lemagrag the Magnificent, Sorcerer Extraordinaire, Binder of Mystic Shadows and Slayer of... etc." or so he liked to postulate.
But right now, he was none of those things. He was just Lem. Just a lost gnome looking for his lost friend Abigail.
A young human girl who had the tendency to disappear from sight when a beautiful butterfly or a bird or... - well anything really - caught her attention.

He had been busy with reorganizing his bag and by the time he realized, he was alone. He scanned the horizon thoroughly and checked behind every tree, bush and rock but to no avail.
Being short of stature did not help him in this regard. Eventually, he found himself at a unique landmark. The Meeting Stone of Moonbrook. A popular meeting place for adventurers, he had heard.
Just then he heard some giggling behind him and sighed.

"Finally! I've been searching all over for yo..."
He swallowed his words in shock. He expected Abigail but he could not have been more wrong.
There were two female bandits standing now in front of him, with their arms on their hips, eyeing him intently. With the setting sun at their backs and a significant height difference, they were quite intimidating.
Recognizing the red bandanas of the Defias immediately, a cold chill ran down his spine and his legs felt rooted in place.
Caught out in the open by surprise like this, he knew he was done for.

The two girls looked at each other. The blonde one - who was a head shorter - pointed at the gnome, whispering something to her brunette companion. They both began to giggle.
Lem got to his senses, shook himself out of it and took to the only option he had left. As a last resort, he dropped his valuable bag and ran.
The gnome ran like the wind as fast as his legs could carry him, breathing heavily, but it was to no avail. Having longer legs, the two ladies caught up to him in no time... It was all over.

He closed his eyes and gritted his teeth, expecting a cold dagger to be plunged in his back at any moment and then...
To his shock and surprise, he was grabbed by the arms and lifted several feet up in the air. When he opened his eyes, he was sitting in the lap of the brunette lady in red.
With her big hands, she had a firm grip on him and he could only shake his legs in a futile effort to get away.
He could not imagine what heinous plans they had for him and he was already shaking with fearful anticipation when the blonde girl bent her knees and snuggled up to him.
He pulled away in horror, only to have pushed his face into the chest of the other girl, who was looking down at him fondly.

"Oh my gosh! He is soooo cute!" the shorter girl squeaked and poked him in the cheek.

Lemagrag the Magnificent, Sorcerer Extraordinaire looked away in horror as the girl snuggled ever closer. In his futility, the gnome tried to scream but he could only utter a feeble: "Help!"
Top 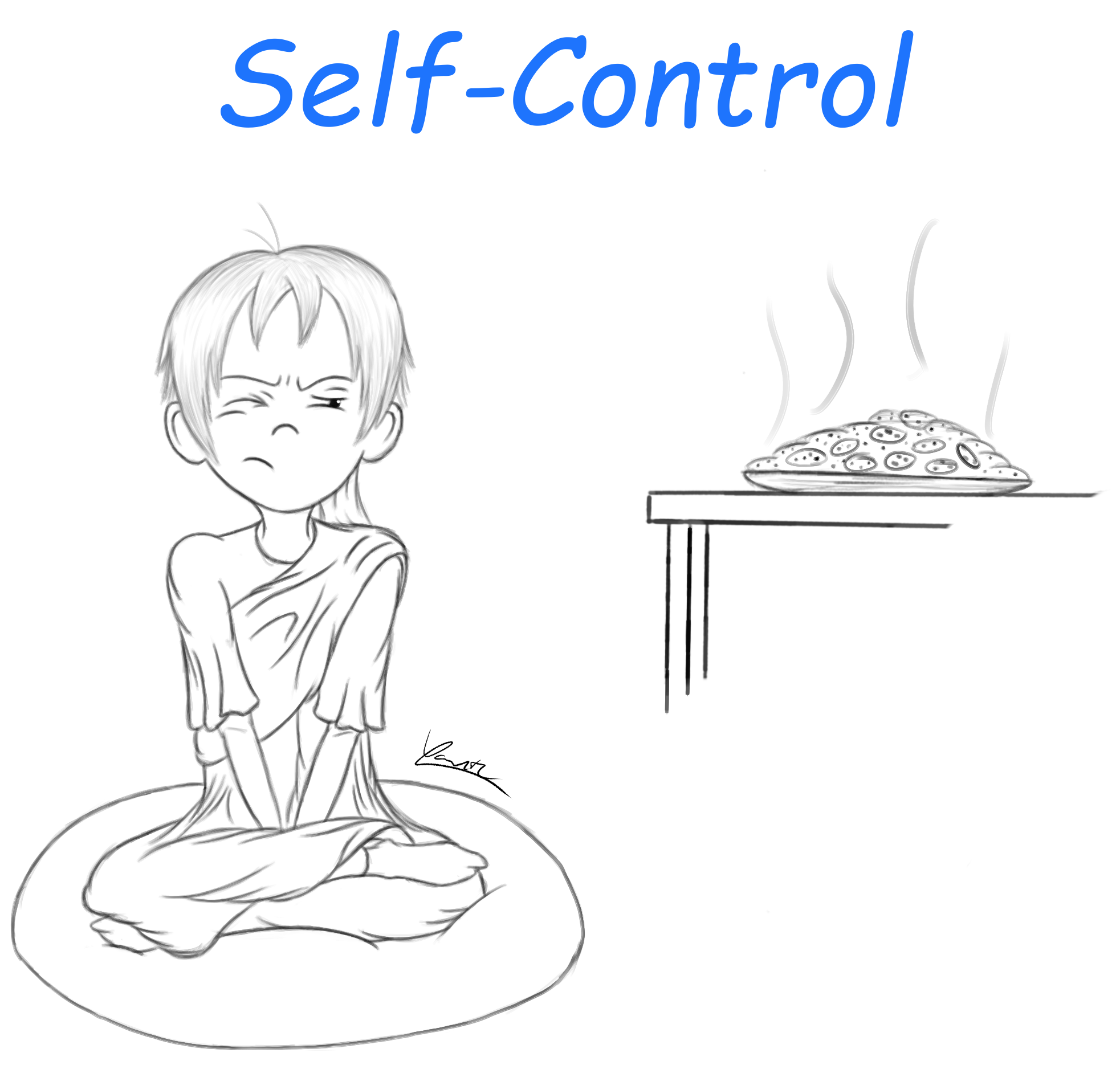 Sometimes, it is hard to resist temptation...

A little something I whipped up, while I work on my 2-page comic for Halloween.
Hope you turtles are having a good time.

Wow. I am really into how your style is forming up. Gotten so consistent it's wonderful. The color is also a nice bonus, but I like both.

Thank you Merikkinon! :) That means a lot! And actually I have been working on a Halloween comic but it was a big learning experience, so I could not finish it on time but the first page is almost done. Also a remake of my first drawing, Autumn Girl, is almost finished. I'll post them soon. :) After that I plan to make a real comic..
Top 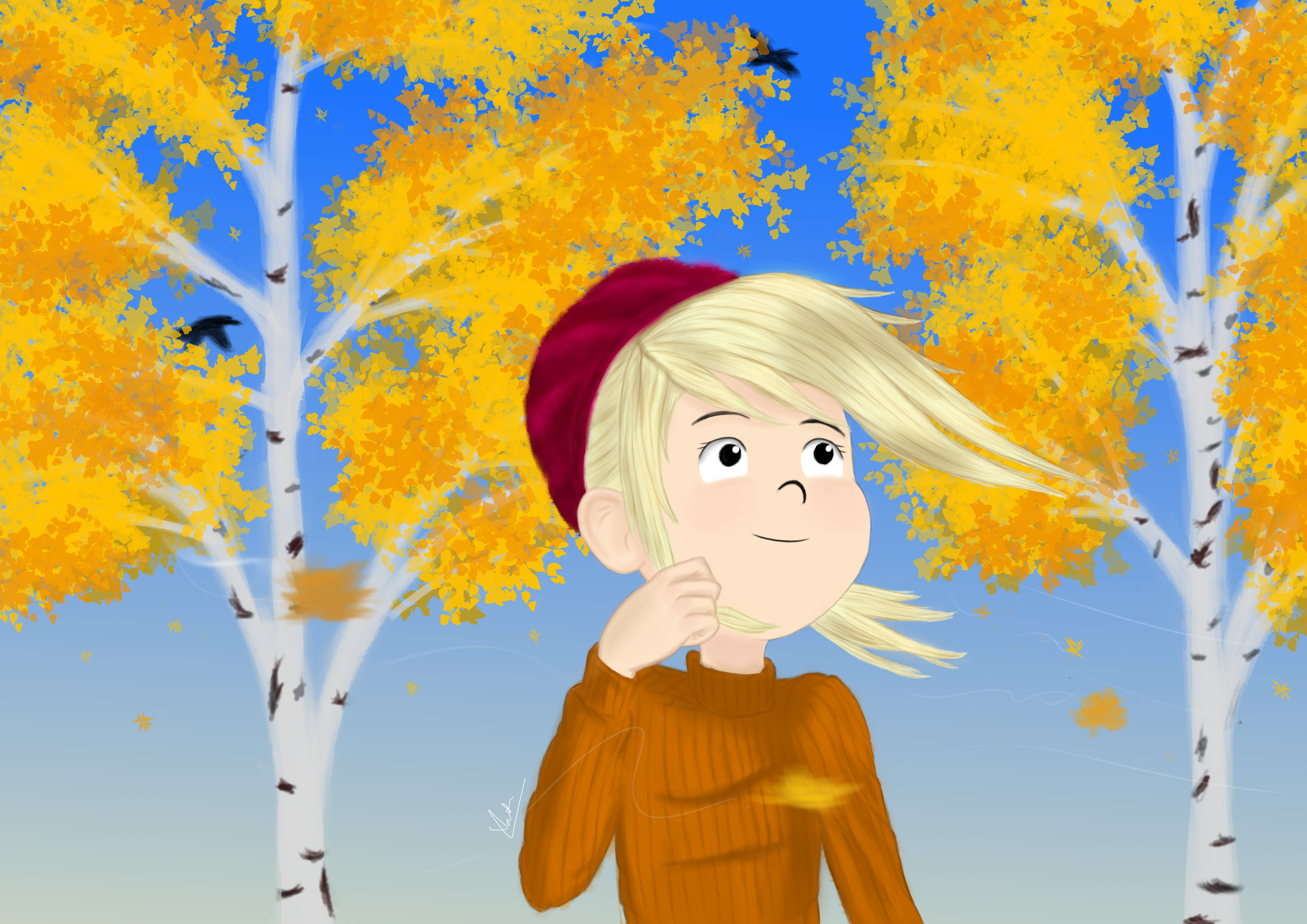 Autumn Girl Remastered.
I saw some birch trees in yellow, with a clear blue sky on the way home and I just had to capture it.

Thank you! :) There is something about sunshine and cold wind together. Always gives me goosebumps.
Top 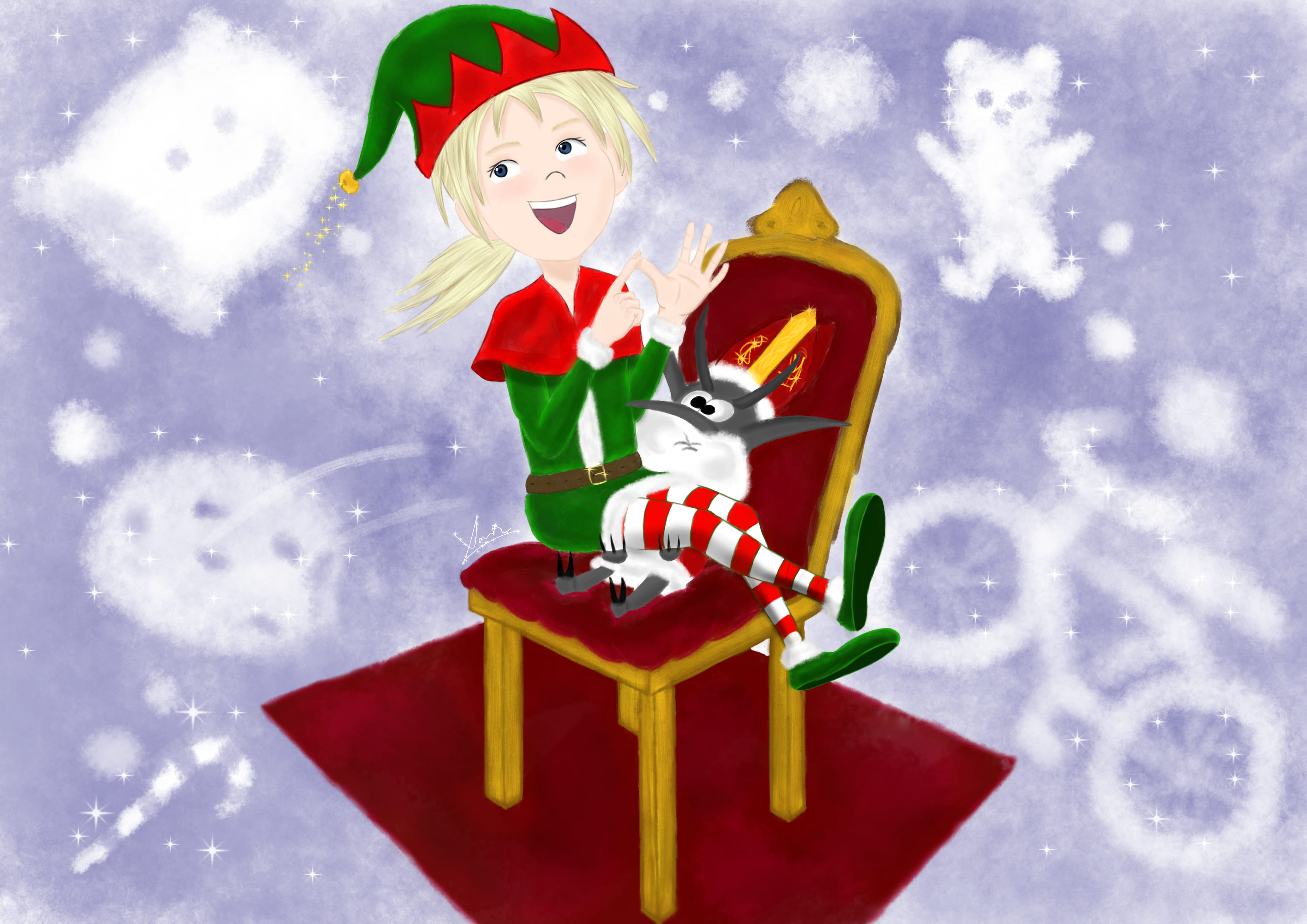 What do I want from Santa? Nothing much really, just one little thing...