We might have a common enemy,
Still, to each other, we are the greatest threat!
The realm is in need of an army,
Golden Skull Clan doesn't fret!

Blood and Honor, For the Horde!
It's in our veins, it's our code!
We lost a home, not a hope.
With fel and rage we had to cope.

New beginning or all for naught,
Tear of hope after the drought,
Won't give up, always fight,
For Horde, for future, for our light!

Golden Skull Clan is:
- a community that will satisfy your needs for adventures, questing & dungeons. Raiding is still far away from us and we will think about it and manage that part of game when time comes.
- planning to organize various events that will include opposing faction quest hub wipeouts and zone lockouts, reputation farming, crafting & market events. Basically everything that isn't already scripted in game. We plan on providing unique experience on unique realm.


Be the change, do the unexpected, do the unscripted... Become the member of Golden Skull Clan!

it just shows that we just don't give a damn mon...

I met few very pumped up guys... just give us time

Thanks for all signatures folks! 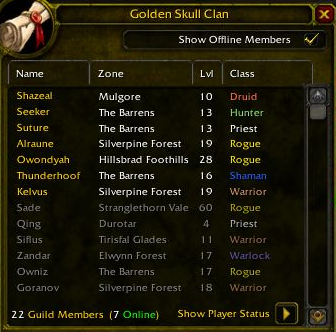