Turtle WoW is moving to the next expansion! Welcome to Rainbowlands!

What a lovely spring day! How’s life during the quarantine? We hope you are not TOO SAD about having to stay home, because you still have Turtle WoW! To ensure your well being we’re happy to announce that we’ve started to work on the next expansion: Rainbowlands! Visit new OUTSTANDING leveling locations, meet totally new magical races, creatures and FRIENDS!

Here’s the Changelog of what we’ve achieved so far! Let’s begin with these CLASSY class features:

Double-bubble! Now your Divine Protection spell lasts as twice as before! Oh boy! Wait, did you believe this!? Silly you! Paladins have been removed from the game entirely for not being cute enough!

Holy Priests are required to turn down the luminosity of their light as it is blinding people and has been recognized as a health hazard. Failure to dampen your light will result in a fine by the Azerothian Health Association.

DO YOU LOVE TANKING AS MUCH AS WE DO!? MEET DOUBLE-WIELD SHIELDED WARRIORS!

Hunter now can equip Two-Hand Maces. IN EACH HAND.

DEHTA has claimed Hunter pets due to the constant abuse, including removing animals from their natural habitats and sending them to their death. Hunters will now have to fight without pets.

Moonkins have received a new ability: Warm Hug! Use it on a friendly player to make them share a part of their loot with you!

It is now possible to pickpocket from players! Be careful though, if any npc sees you pickpocket a player, they will summon the guards!

Backstabbing and Stealth are dishonorable actions and have been removed. Rogues are now required to fight honorably and in the open, in a proper cute way!

New tank pet: DreadLord. To get one, you have to enslave it yourself from Lord Kazzak’s garden.

Succubi have properly received their male version so that all genders are properly represented. All male Warlocks will now find that their Succubus has been replaced with a male Incubus. Do not worry, the Incubus continues to be madly in love with the Warlock.

Shamans can now wear Plate and Earth Shock functions as a taunt.

We now have Furries. Awww, isn’t this tail bootiful!?

Charm has been added! Use your cute tail to charm other players and stop them from attacking you!

Love Beam allows you to shoot out a rainbow colored beam at enemies, turning them into allies and terminating combat.

Later Development Update Paladins: Paladins have been re-added but with 50% extra Foxtail.

All bosses have been given Fox ears and a fluffy Fox tail! Behold Ragnaros as he embraces his inner furry.

All classes now have their own cute mini-pets, except Hunters, they get nothing as they have proven they’re unfit to care for animals.

We’ve also added Flying Mounts! Pick your personal Happy Riding Cloud and fly up in the blue sky! It’s worth mentioning that Riding Clouds have a mood system and if they’re sad they can drop you off! This typically happens if you’re saying mean words in the World chat.

Also, speaking of mean words: each F word spoken in the chats will cause your character 500 Holy Damage! Be nice and cute! 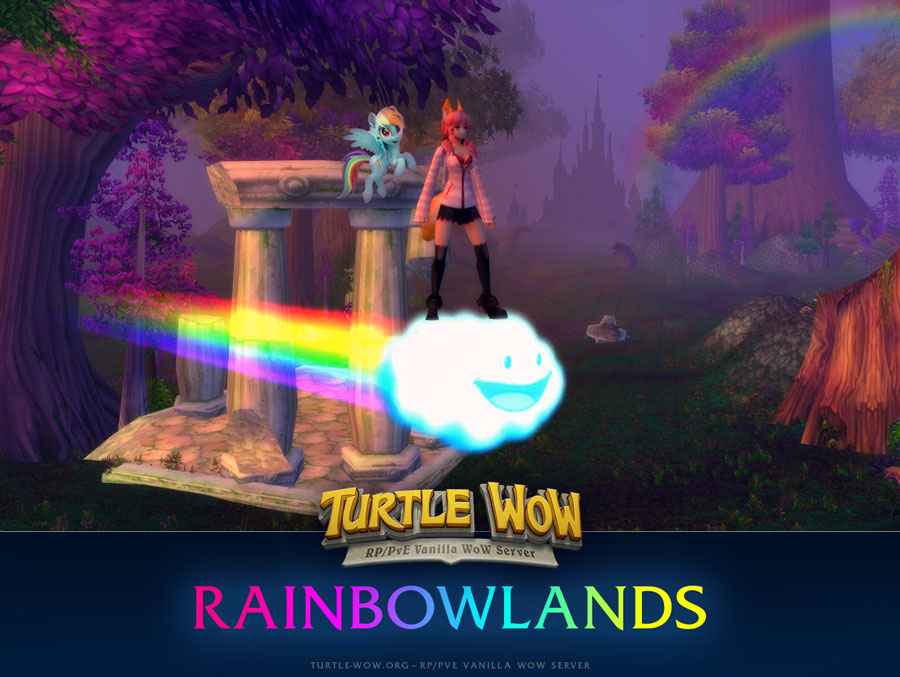 -"Paladins have been removed from the game"
*Everyone liked that*
Top

I think plate for shamans is a little bit much, right? How do you intend to balance this?
Chieftain of the Dreadskull Clan
viewtopic.php?f=23&t=552

My wife was a bit exited then tbh. :)

Yeah, I skipped to the hunter part. Then thought "Hold up WHAT? No Chomper?!"

Just putting this out there "I want 2 shields" .
Top

Re: Welcome to Rainbowlands! (Aprils Fool)

Shame a lot of this amasing new features stay as a "April´s fool". I really wanted that Plated shaman.

You got me for a while! i was like..WTF it canno't be XD thanks Elune is not true
Top