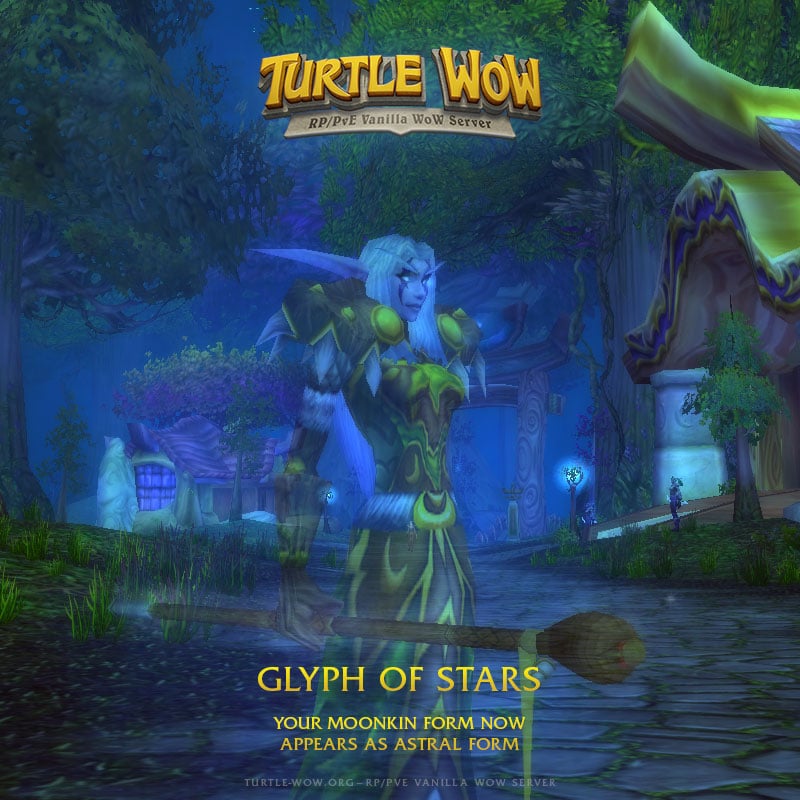 Amazing i was about to say the same thing, correct me if i'm wrong but warlocks were originaly necromancers, it'd be awesome to bring us back to our roots, seconding this!
Top

Here are more inspirations. Some of them are unavailable, since we're on Vanilla, though.
Top

So... at risk of sounding overly on brand... Has anyone considered a Glyph that replaces a druid's bear form with a big turtley thing?

(I know druids already have a lot of glyphs..... but druid is my favorite class and I want to be able to turn into everything.

Let's see about some other glyph ideas...

Red rage: your character glows red when you have a lot of rage? (or.. all the time?) I'm thinking about how shadow priest have a purple glow to them. I bet there must be an effect like that somewhere.

Holy light: Your character glows lightly with holy light. Subtly, of course. maybe a glowy mist effect. I feel like I saw something on wailing caverns

smol pet - He's a good boy, but make them a bit smaller.

Permanent pet - Your pet always looks the same. it doesn't matter if they're a cat, a crocolisk or a hyena, they always look like THIS pet. Shouldn't work in pvp, of course. I have no idea how plausible this is, since it would probably need custom creation for each Glyph, as well as rules about what the pet can look like, etc... but... I always felt sad that I sometimes had to leave my starter pet behind. Now Midnight can come with you, even if Midnight is ACTUALLY an alligator

Shadow stealth - the rogue's stealthed appearance is the same as a shadow priest.
Top

What about a glyph for Rogue poisons to apply weapon enchant glows based on the poison. Green=Crippling, Red=Deadly, Blue=Mind Numbing, Yellow=Wound

Another glyph idea, although I'm not totally sure how possible it is, was to allow the choosing of your stealth animation fom any other rogue race. Meaning I could choose to have the Undead stealth animation as I stealth on a Troll or Orc.
Top

ROGUE
Glyph of the Fencer: Hides your off-hand weapon and sets all animations to use your main hand weapon.
Glyph of the Sidearm: Sets your shoot abilities to use a scaled down version of your gun or crossbow as a one-handed firearm (may require custom animations).
Glyph of Shadow Strike: Gives your throwing weapons a shadowy enchant and afflicts targets of your Throw ability with a (purely visual) shadowy debuff.
Glyph of Phantasmal Stealth: Transforms you into a shade (or wisp, for Night Elf/Tauren?) whilst in stealth.

Will throw out some more ideas later, but these were all the ones I had at the top of my head. Also throwing my support in for some of the previously mentioned ideas, like necromantic warlock summons and shadow stealth!
Top

Shaman could have glyphs to turn their ghost wolf into a spectral raptor or plainstrider for our troll and tauren characters.

Perhaps not as a glyph but I think varying totem models depending on race would be nice. The base model fits tauren nicely, but wards for trolls and some kind of orc-like fetish would be good for RP reasons.
Top
Post Reply
28 posts