Ha, ha! Youngest traveler, and boldest storyteller, have you heard?! My, as of late it has been everyone's word! The vale, the vale! The greatest of shows, where all are friends, and none are foes! Hear of this place, where snow is thrown at your face. As fires burn in the night, and warm stars shine with an enchanting light. Hear of this place where all do go, many a staut tauren, a bold dwarf, a curious elf, but where are you though? So come, and be swift, before it vanishes like a rift, in the land of Dun Morogh, among the peaks of Khaz Modan, we are waiting for you, with Egg Nog and many presents in hand! Come, come, there is snowmen and drink, good company, and even presents that come in pink! So what do you wait? Set out on this journey before it's too late!

“ Help Tinsel Lost-Gloves take revenge upon the thieves who have stolen his favorite gloves, and in turn he will reward you with a companion of the valley, a small yet brave Miniature Winter Veil Tree, who wishes to see the world, a most adventurous duo, you and he. To aid you in your future Tinsel shall let his trusted pal Hedwig, a bird of the skies and a hunter of the night accompany you in your travels!”

War! The merry times of Winter Veil are crumbling under attacks by the ruthless adventurers! There are heroes on all sides, and snowballs are everywhere! Join in the fray, and unleash these freezing projectiles upon the many classes, be rewarded with a box of Winter goodies!

It is a period of civil war! Courageous snowball throwers, striking from the shadows have won the first victories against their counterparts! Partake in this endless battle, and earn for yourself a kit of disguising tools, with which you just may be able to save yourself from a certain snowball to the face!

Hailing from the far off lands of Kalimdor, the Furbolgs are no strangers to a good drink, yet it seems the Thunderbrew has run dry and the Grizzlore is getting mad! Acquire Thunderbrew Lager from Grombooze Thunderbrew at his camp in Westfall, and be rewarded with an illusionary secret of the bear folk of Kalimdor, how to look like one!

The times of Winter Veil are always a warm gathering of friends and the wildlife around you, except for the poor Moonkin. The tiny hatchlings underdeveloped feathers are not enough to shield them from the bitter cold! Procure a warm drink, the festive Egg Nog should do! And spread it around among the hatchlings, this should be enough of a good deed to earn yourself a box of Winter goodies!

Holly Tallhair is a regular at many fine gatherings of drinkers and party goers, yet she may have bitten off more than she can chew. The Feast of Winter Veil is the greatest excuse to partake in this alongside her, grab yourself a drink or ten, and dance away the night with her. She may just be willing to give up some of her secret stash of Sparkling Booze in return!

Peace Comes at a Price

How quickly they grow up… you may even forget that they are monstrous frost demons. Snowball has gone on a rampage in the valley, and is scaring away all the other animals. It’s time to put him to sleep! Defeat the ferocious wolf of Dun Morogh, and be rewarded with a bag to hold all the presents that you will be carrying around! I hear it has 18 slots! 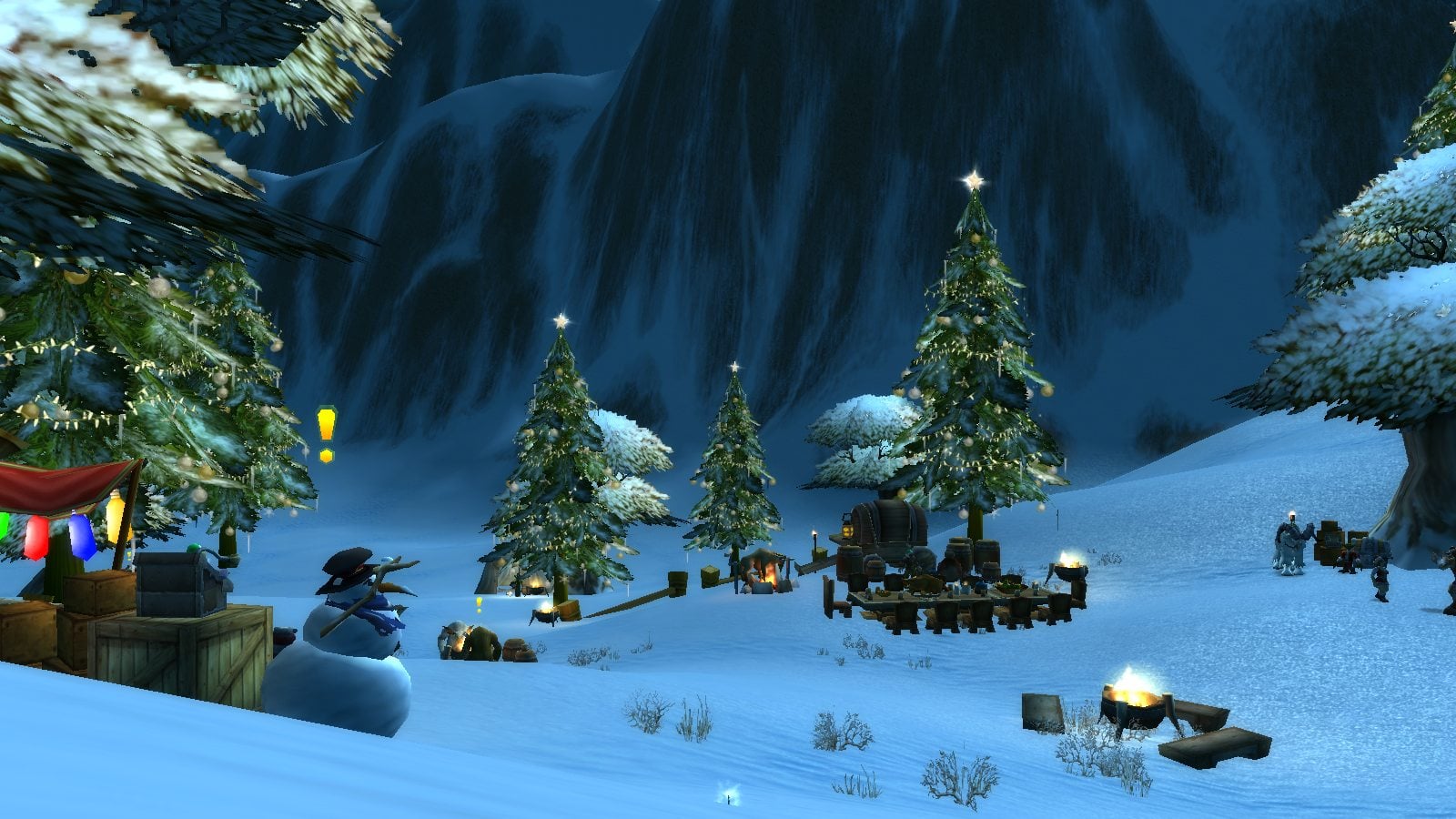 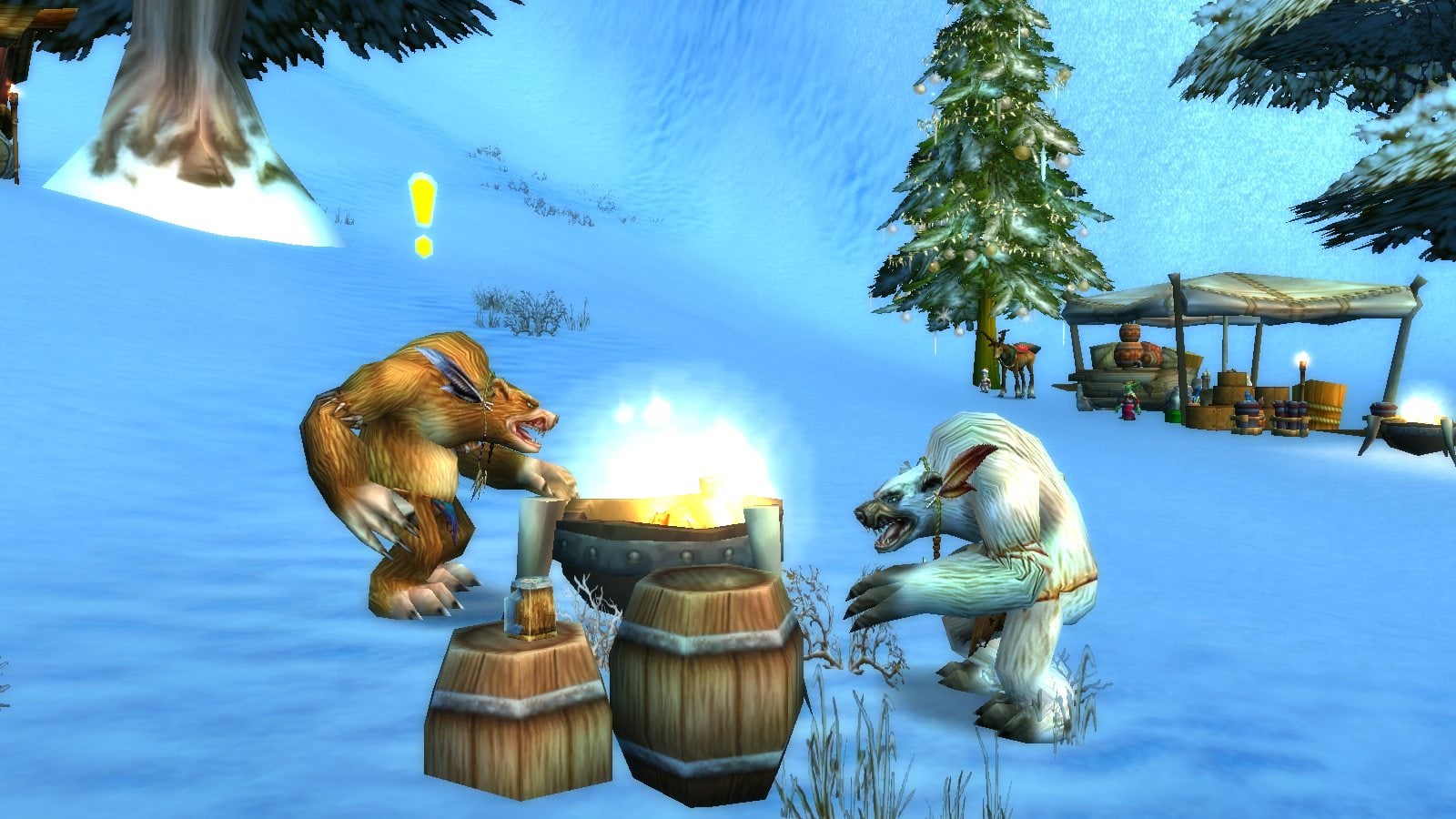 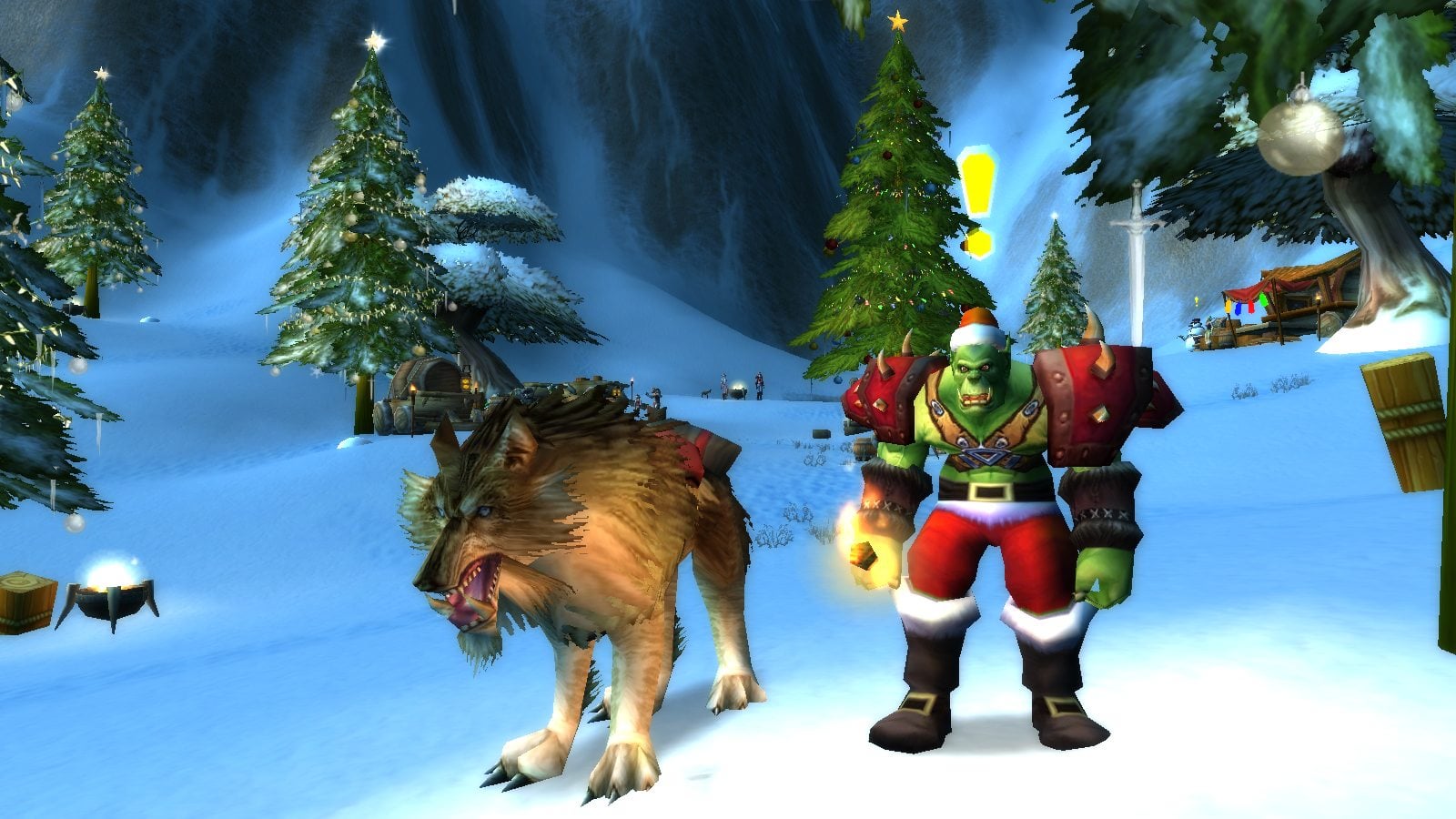 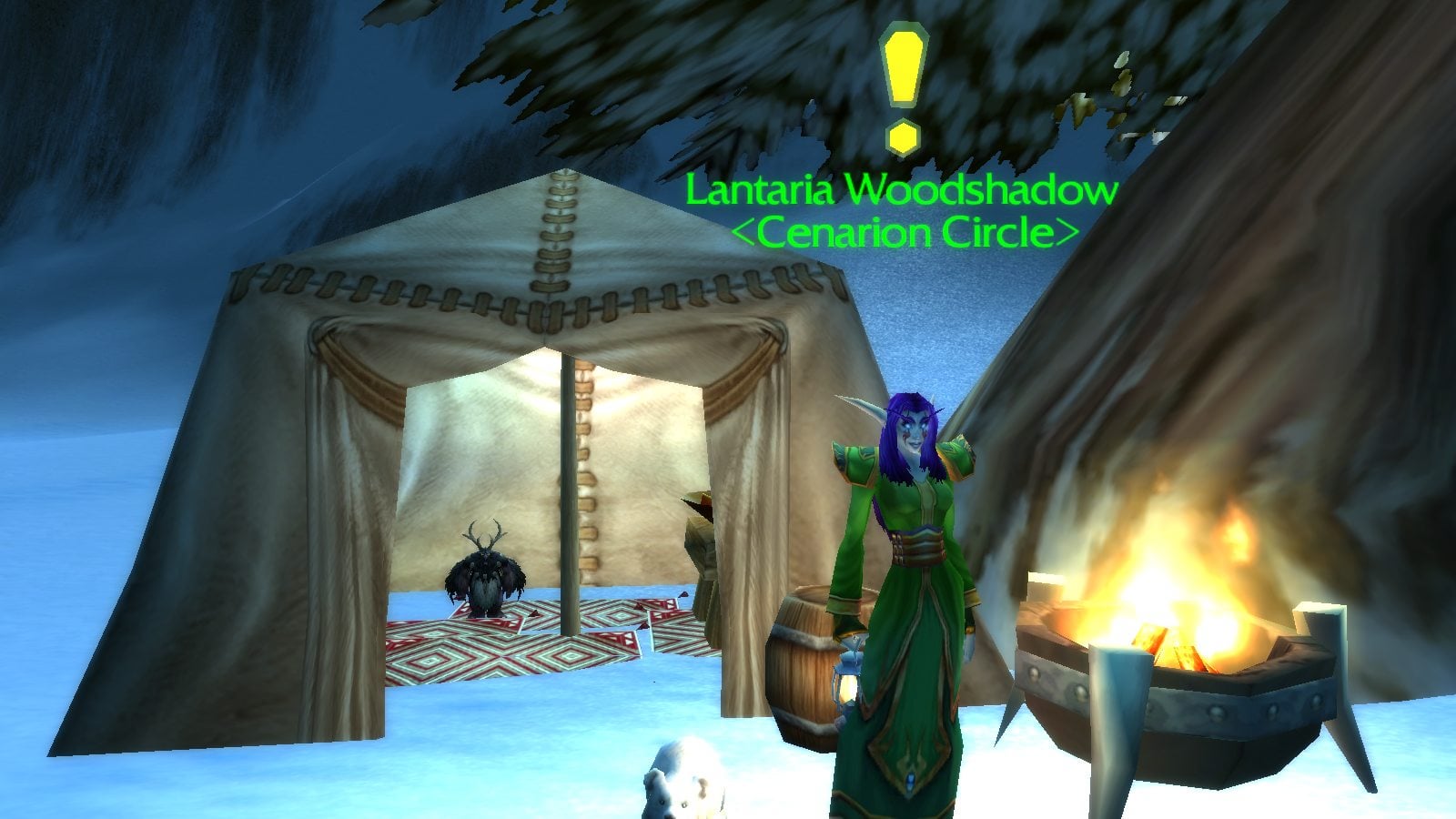 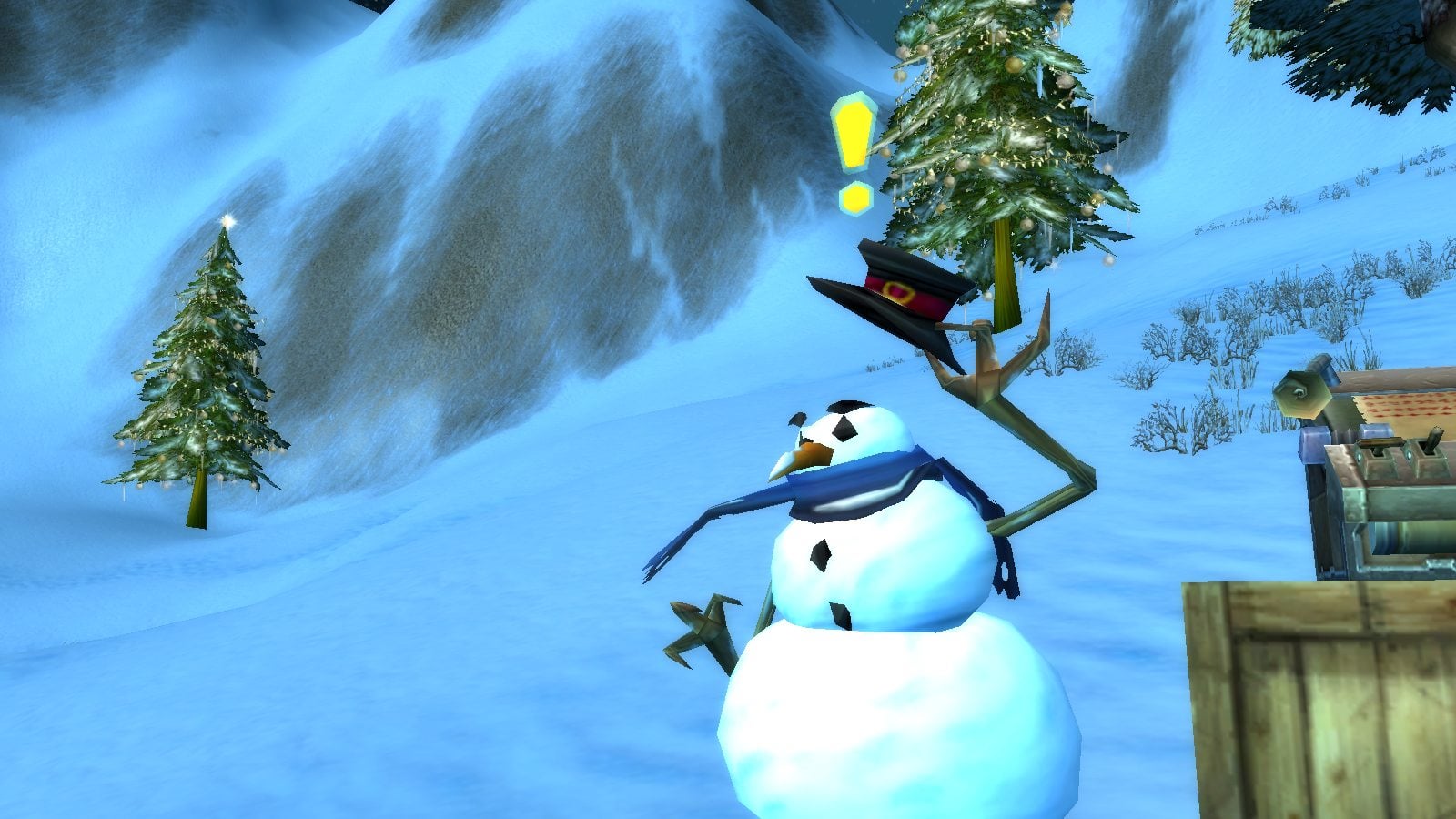 This event sure does press you to interact with others. Gives you a very specific list of players to hit with snowballs... and the snowball attack forces you to group up with people you might hate, or else not get any 18 slot bag reward.
The people you hate enough that you've already foregone almost all of the raids just to avoid. The people who joined after you've met them on another server, and you were glad to finally be rid of them.

This is a wonderful event to bring people closer together... I assume. I haven't yet been able to bring myself to take part in any of it.

Sorry I didn't post anything sooner, Torta. I couldn't think of anything that wouldn't be in bad taste. I don't know that something is always better than nothing in terms of PR.
Top

This is a neat event. Thank you for the work put into making it happen. One request: add milk to the spirits and spices vendor in the vale to save a little bit of time (or an hour if hearth and meeting stones are on cool down). Hunting for eggs already requires a field trip and a bit of travel.
Top

Okay, first off, I love hitting people with snowballs--it's fun! I bound my snowballs to the same key I use to mount, but on bar 2, and I kept pelting myself with them forgetting to switch back to bar 1; I got a kick out of that. And THANK YOU for that quest to pelt players because it meant I got to pelt my Guild Master, Aurrius! Lol!! I've only got four players left to go! Wish me luck!

I love the snowman disguise, it's soooo cute! And seeing people running around as furbolgs has been making me laugh quite a bit--one of my guild mates loves turning into one while we're roaming through dungeons.

I didn't notice it at first, but when I was doing the quest to save the little Moonkins from the cold I saw that there were dagger ornaments on the trees--lol--and I absolutely loved that! I was trying to figure out whether they were some sort of crystal or if they were ice daggers though; anyway, I got a kick out of that too.

And I have to thank you for the Snowball raid because that quest not only gave me 16667 XP, but I got an 18 slot bag out of it also--I was so happy!!! I needed that extra bag space badly--I'm an Engineer and I've got a material hoarding issue--just can't quite seem to properly balance the time between leveling to 60 and making profession goods.

I had a lot of fun fighting Snowball with the other players when I finally got to do it--I actually didn't get smeared, but I won't lie, it's only because I have a bubble (lol!). When we got him down to a mere giblet of health our poor raid was almost nearly massacred, and he almost got me too at the end--but, I managed to get my bubble off in time, and even got to throw a Hammer of Wrath in his fuzzy butt! VENGEANCE FOR THE RAID!!!

Thank you so much Staff for all the hard work and effort you put into making Turtle-WoW a unique environment to explore Azeroth in--I've been enjoying my time here immensely! You said you only accept a thank you in the form of forum posts, Torta, so here's my first of many thank you posts!!!

Please never again include Aurrius in any quests.
That was a mistake.
Top

That was on Torta. NeilDeGrasTysonNoWords.jpg

Updated the top post, thanks Aureiian for writing a detailed review for the event quests :)
Top

Harsh reality (from a lowbie POV):

Icy Menace I
"a small yet brave Miniature Winter Veil Tree, who wishes to see the world" is a 1 use item, you just grow a small Christmas tree that lasts for a minute or two.
Around 5k XP is nice though, but one of the chars to be snowballed shows up only on Saturday evening ST for an RP session somewhere in Hillsbrad/Alterac, and most of the time is stealthed (and since that RP campaign seems to be finished already, well, good luck finding him now)

Icy Menace II
Again, ~5k XP (I hope) and a pet is nice reward, but one of the players took a break from the server (there is a forum post), and another one shows up in Ogr/Xroads, then either goes off in like 10 minutes or is going to a raid location

Given the other 5 people (targets of one of these quests) are announcing "showballing sessions" or just are generally present in lowbies-reachable places, and well... make your own conclusion if these quests are worth all the time you will spend

Snowball Wars: Episode I / II
EZ, get XP and a random present / snowman transformation item (you can't move in this form, good for AFKRP)

Grizzlore wants Thunder
EZ if you can find a way in the hills from Moonbrook backside to the brewer guy, not getting into 17-18 lv Defias

Bracing the Inevitable
Have cooking 35, or have someone to cook egg nog for you. Get a random useless item

Jolly Holly Dances Prolly
First days gave only XP, now gives some booze and some soulbound stack of items that promises to do something funny to your friends

Peace Comes at a Price
This one for big guys, but you may go down the Vale almost to the watchtower, and to the right, there is a harmless Wolfie, sometimes being attacked by a random gang. If the attackers succeed, sometimes a couple of insane attackers will kill their raid buddies
Top

I'll replace the quest targets with the active players on the next update.
Top

Oh, thanks! There's still hope for me to do them.

But generally, I think such quests involving particular chars are too good-will-people-dependable. And targeted people can have real life issues too. So maybe next time a list could be shorter (say 1 for lesser reward, 2 is still reasonable, 3 better discuss with players involved to be good guys), or targets could be of general trait combination, like "warrior 60", "tauren above 50", "elf priest", "dwarf female" (if this is possible from technical side)
Top

Merry Christmas to everyone.
Top