I have finished my custom secret quest. Its a word archive.ill send to gheorr fist to read it. I Hope the staff accept it. I put much effort on it. I wish people enjoy doing it as much as i making it
Khanzo. Blademaster and Explorer
Top

I wanted to create a small quest series that would "give a point" to killing King Mosh in Un'Goro crater. The idea is that Torwa Pathfinder would give out the first quest after you completed "The Might U'cha" and "The Bait for Lar'korwi."

The rewards for Regicide (subject to approval or modification by you):

Sort of a meme/pvp item, assuming a +Holy Resist item can even exist. 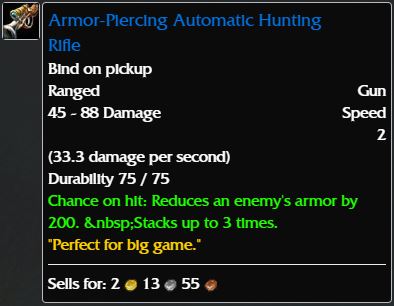 Not sure if this is good or terrible, but there aren't a lot of "fast" endgame ranged weapons. I thought the proc might make it worthwhile. 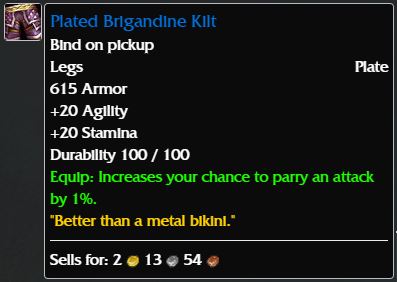 My own selfish desire to give Warriors a chance to wear a skirt.* Also, no pre-BiS competitive tank pants give Parry or Agility. 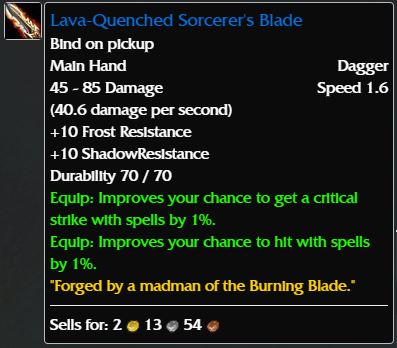 Something to take some of the pressure off casters to farm Maraudon (except for you Paladins. But you want that ring from Princess anyhow, right?)


*I imagine the in-game skin would be a recolor of Paladin or Shaman T2, though if there is a leg skin that could be stretched over a skirt model and still look good, that would be neat! Only one I can think of is something like Abyssal Mail Leguards or Legplates of the Eternal Guardian.
Top

there is no single item in game with holy resistance as far as I know. And there is no Holy Resistance in character panel. Don't think that it should change.
Top

Sort of a meme/pvp item, assuming a +Holy Resist item can even exist.

Unangwata wrote: ↑
Sat Nov 07, 2020 10:53 am
there is no single item in game with holy resistance as far as I know. And there is no Holy Resistance in character panel. Don't think that it should change.

BY DESIGN ... meaning intentionally by Blizzard ... there is no Holy Resistance.
This item breaks that standard.

Approval Denied (for this item) on that basis.
Top

Yeah, that makes sense. Should probably take the Holy Resist option out of the item creator then, huh?

Happy to have any items designed by the staff looking for a home to be put in place, or just limit the quest to 3 rewards. I honestly came up with that on a whim since I couldn't get another item idea to work. I'm sort of tapped on what to add that isn't already around or useful.
Top

Holy resistance is a stat that exists in the game's database but blizzard intentionally did not implement any items that give this stat. An active that absorbs holy damage is still a possibility and fits it as it's a trinket.
Top

You're right. But the tricky thing is that I can't make new spells (no way to do so that I know of) and the only ability I could pull for that comes from Holy Protection potions, which sort of undercuts having that item in your inventory at all. I toyed with adjusting it to a proc on hit, but that really takes any -very limited- existing utility away from this item.

Instead your suggestion helped me come up with this idea: 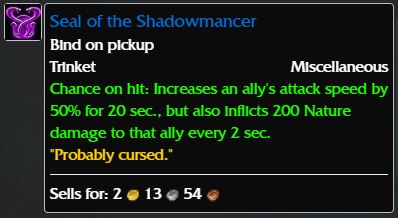 But I'm not sure if the spell is going to work correctly, since it's a spell used by NPCs on other NPCs. It would need to be tested. But it preserves the concept as a meme/pvp item, since it could situationally help you become immune to Gouges and Polymorphs while giving a nice boost to DPS. Also switched to trinket since it fits better there as an chance on hit buff item.
Top

I actually love the idea of a trinket that both buffs and harms at the same time, would use if it was implemented
Top
Post Reply
203 posts