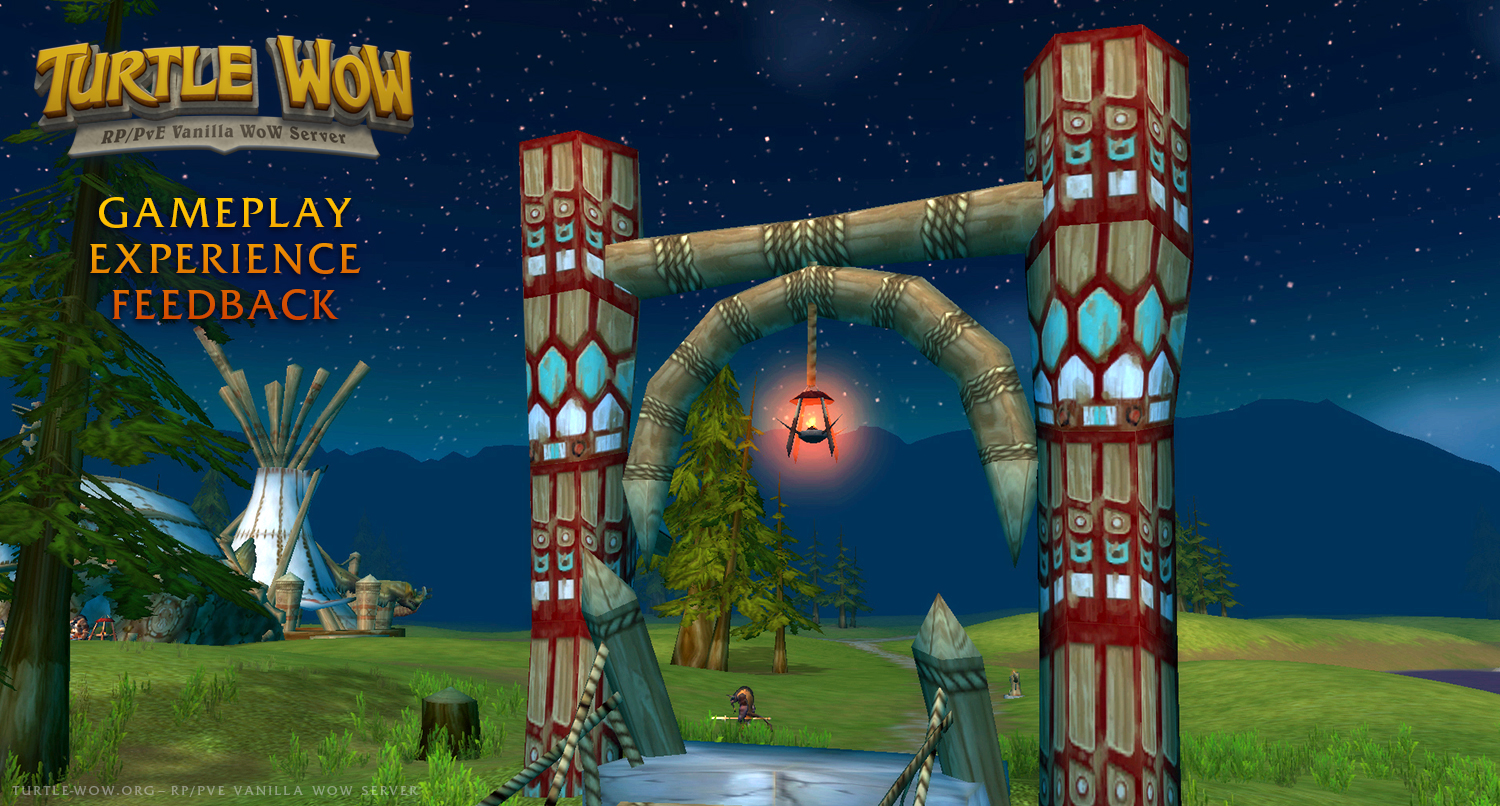 It's been 3 blissful weeks since we launched our cozy little realm - and we hope you’re enjoying the rush and stress free gameplay!

However, we would like to talk to our playerbase and ask for your feedback on the current situation. We haven’t received any complaints, but the numbers speak for themselves:

Almost 8000 characters have been created, yet fewer than 500 have reached level 20.

We must ask — have we made things too slow?

During our advertising campaign we recorded 300,000 players interested in Vanilla, yet many players stopped playing within an hour, and several people have mentioned that the low rates and lack of cross-faction interaction as the reason for not wanting to play.

Although our goal here isn’t about having the greatest population, these numbers are indicative of a potential long term problem. Those who have stuck with us since the beginning; we won’t take any action if you don’t want us to.

However we must decide what to do next — what would you suggest as a possible solution?

Once we’ve settled on a solution, we’ll consider emailing those who stopped playing within a short timeframe and see if they’ll give us another chance.

After some internal discussion, here are some of the ideas we’d like to present:
We’d love to hear your thoughts on the matter, so please let us know as soon as possible!
Top

Normal XP rates with normal everything else. Make this the go-to PvE server.
Top

Grats on 3 weeks.
I'd suggest normalizing the xp rates in some way. This server has been presented to us with the idea of giving us a good questing experiencing, so we can get to know the story of every zone, without having the problem of outleveling it.
The bad point about this is, that for example, I played alliance. I have never had such a horrible questing experience between 30-45. The quests are too scarce, it's mostly orange quests left for me, and there's a lack of players in my level range.
I can see the appeal to some enjoying the lower rates.. No, I actually can't.
At this rate, leveling is just a pain after 40. I'd really love to see some upped xp rates.
Having quests that tell you to kill like 40 mobs (Rigger Cove in Tanaris) do not feel rewarding in the slightest. I killed 40 mobs and I got like 4-6% grind xp from that.
And if 30-45 is awful, I don't want to imagine 55-60.
'Tis my feedback.
Top

Well, the low numbers are explainable... RP is a niche market in the pserver community
PvE seems to be somewhat less popular
0.5 rate where most pservers have increased rates also serves a niche market.

And Northdale just opened up & potential Classic release dates basically got announced/leaked... All in all, not the best environment to open a niche server for a niche market with punishing xp rates ;-)

If you want more people, the solution isn't to dabble around with tweaks and just set xp rate back to 1 and advertize a lot on the various forums about how cool and vanilla we are.

I'm honestly taking it slow, since I'm burning myself out doing factory work and anything else that might pop up. I don't mind the rates.

This additional challenge should stay as a warning to force people to group together, quest together, do professions together, probably even trade and auction.

You should check activity rates on those characters as well. Fair few might have came, tried and left what you are offering.

I like it how it is currently. The lower XP rate is somewhat the key factor what drew me in. I leveled in places where I have never had to before, which was a very unique experience. But I can see the point of other people, maybe the XP rates could be set to regular (or have an option for it) as soon as you reach lvl 30 or lvl 35
Top

Greetings, dear developers.
Very glad to see that you want to improve the server. First of all, I would like to draw attention to a large number of bugs, ranging from ordinary mobs to tasks. It would not be bad for you to raise the level of experience gained for assignments in two. Increased the percentage of objects dropout for completing tasks and equipment items. It is a great desire that you communicate with the players more often, pay attention to their requests both in the game chat and on the forum. And most importantly, make a good advertisement for your server, otherwise everything will be empty without players.
Thanks for attention.
Top

I like the pace. Perfect to me. Although I'd suggest to make an option in shell shop for those who want normal XP rates, since they are all so rushing to the end. Let'em buy it.
Support the Turtle

Leveling is painfully slow. After level 30 it's difficult to find a group for dungeons or elite quests, so besides the slow rates, dungeon and group quests are also left undone. Same about PvP - couldn't find a single WSG after 10-19 bracket. I'd prefer 1-2x of normal experience so that we can get to 60 sooner, have active battlegrounds and go through end-game content.

It would also be nice to have a faction-shared world chat, mailbox and AH. In world chat we would at least be able to encourage others to join battlegrounds.
Top

My initial feedback is that I've really enjoyed playing all the zones. I've cleared the starting area in Dun Morogh and Elwyn Forest, then the secondary questing areas there and in Teldrassil. I'm nearly done with Thelsamaar, Westfall and Darkshore, and about to go through Wetlands, Redridge and Ashenvale. I'm currently level 21, so I generally outlevel most quests and can complete them with virtually no problem. So, in that regard I think that everything is going great with the original intent. It's been really cool to do quests I never even knew existed even though I began playing in 2005. However, if this becomes more problematic later on, maybe we can adjust the rates up for later on in leveling? IE, after 40 it goes to .75 or something? Not even sure if that's possible.

Second, I've never been on a server with a more overwhelmingly kind population. I've happily abandoned my pre-raid BiS rouge on Elysium for this community. I think that the rates strongly discourage griefers, louts, jerks, and hateful people, and I wouldn't want the server to suddenly be populated with the usual riff raff that get drawn to private servers. Again, maybe having the lowered rates for the first 30-40 levels would be a strong enough deterrent without impacting the ability of good players to join the community. Or maybe quests give 1.5 exp after 30, etc, so that leveling speed increases, but the focus still remains on questing our way through the game.

Maybe another solution is to increase rates in dungeons to encourage grouping for these as a way to level differently. Not crazy, just maybe make those XP rates normal and add XP to BGs to give people multiple ways to level.

Bottom line, this server lends itself to casual play and enjoying things other than grinding out fast leveling and getting to endgame as soon as possible. I'd really be sad to see that change too drastically and open the floodgates of toxicity that might follow.
Top

Good day!
I would normalize the experience, it is very good to raise online, and hence the economy of the server. While I was leveling up the character from 0 to 24, I met a lot of people who didn't like the small amount of experience per kill. It's really very slow.
The idea of sending messages sounds great!
You need more good advertising!
Everything else is fine!
Top

I think one problem is indeed the low XP rate. It's not so much a problem in the first 20 levels but in the 40s it get's tedious.
I'd suggest to give players the choice to set their rates to "blizzlike" x1. Perhaps give some special - cosmetic turtle themed - reward to people who level all the way to 60 with x0.5 turtle speed.
Top

The RP in front of the server type already acts as a community filter so I do not think the wrong crowd will be attracted suddenly.
[Pickles, lvl 60 Tauren druid]
Top

While leveling both Alliance and Horde, I kept running into the same issue; That being, the fact that there was just never enough players to assist with a difficult quest. Which, I always solved with grinding the living Hell out of the current zone to level-up and gain a new spell to help me along the way. Unfortunately, with the low experience gain I could never make it to the necessary point of progression.

Though this might only be an issue for me, I think raising the experience count to higher, 'classic', or normal rate could be very beneficial for everyone involved. That's just me putting the two cents in. Everything else? Fantastic, rarely have I run into any bugs or game issues otherwise. Aside from the experience gain and player count on either faction did I ever find an issue.