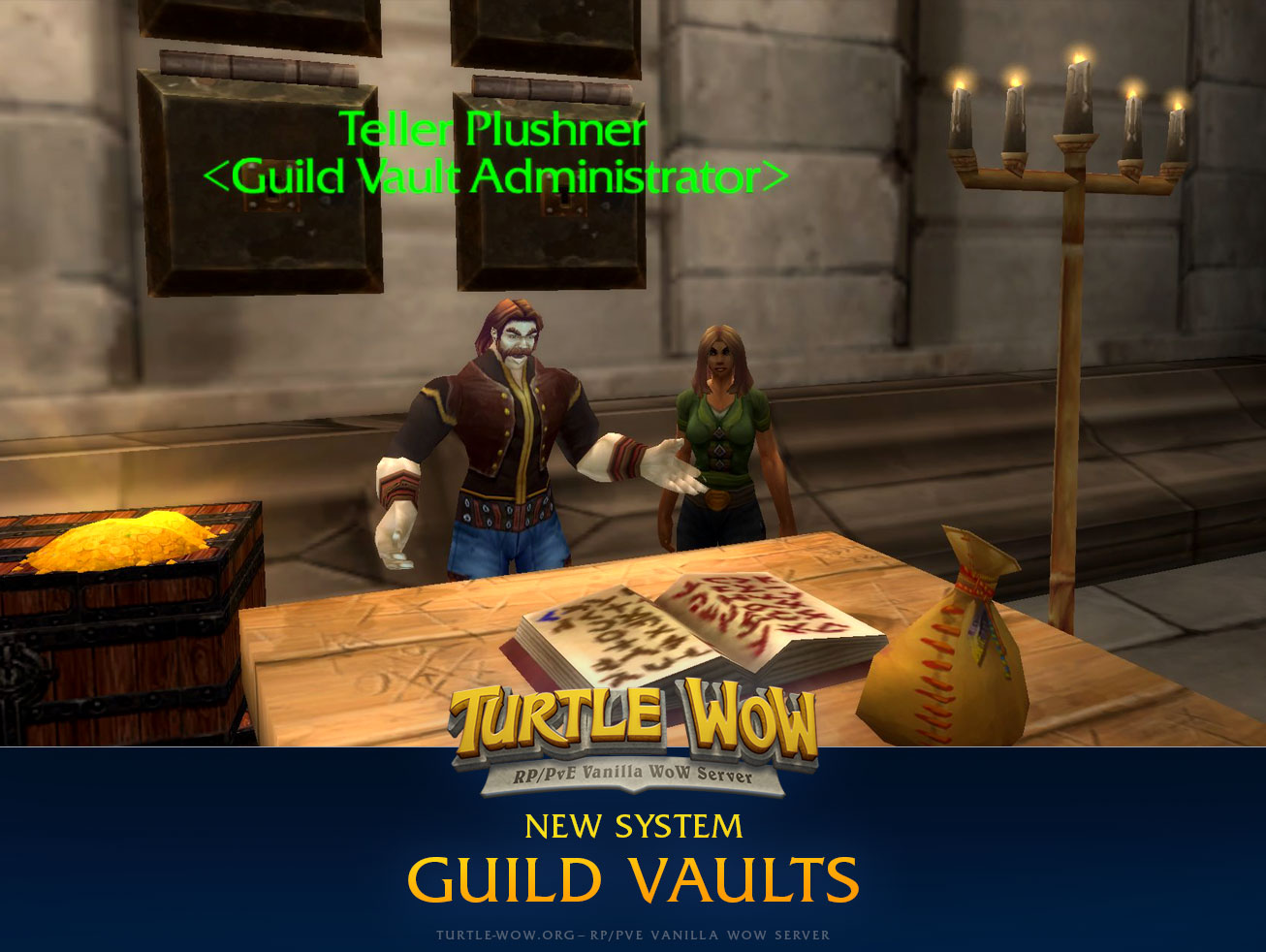 I’m happy to announce, that starting the end of May, guilds will be able to have their own Guild Vaults!

We hope this feature will help to get over with having non-immersive level 1 bank alts.

How it will work?
There’ll be a few limitations due to the nature of the implementation (default vanilla client has no support for guild banking, we had to find workarounds). 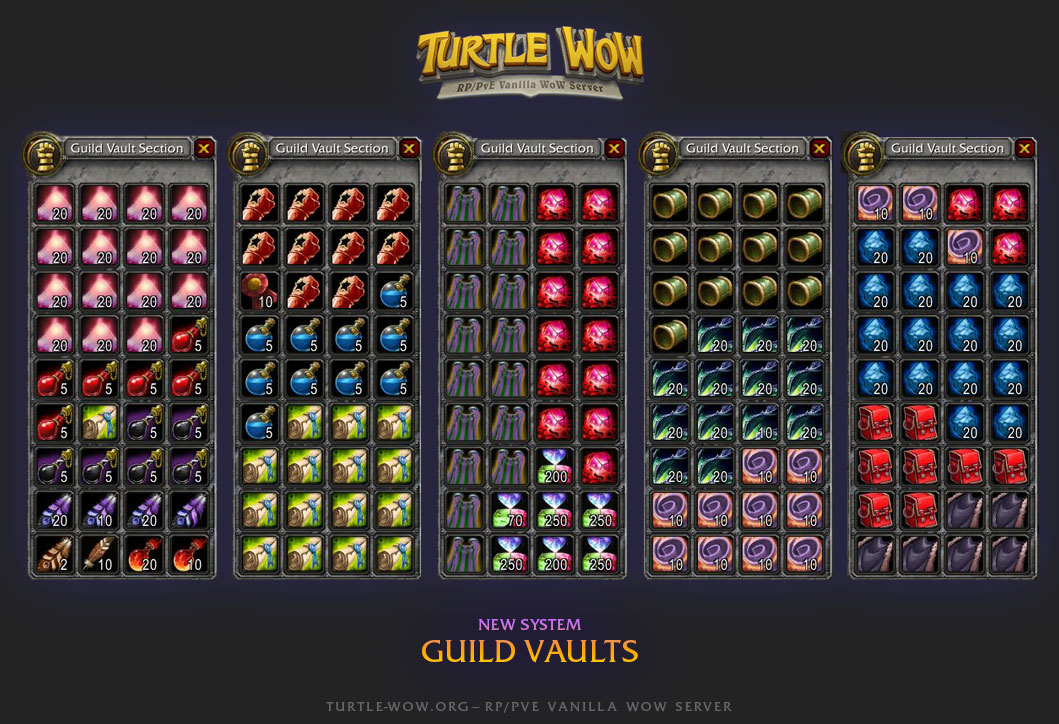 by Chlothar
Finally something i can dump some gold coins in!!

5 thousand gold is frankly too unreasonable a price for the reason why you created the guild bank system. from what ive seen it was created to stave off bank alts and single player guilds that want extra bag slots. in TBC the first 2 bank slots are under 300g which is reasonable and wouldnt need bank alts to be created, at least to the extent vanilla used them. using bank alts is still significantly cheaper than 5k gold. as for single player guilds i dont care much what they do.

in terms of scope for the amount of gold needed for a guild bank here youd need to do at least 12 full epic mount grinds (not including the one for your mount, not meaning paladin mounts either) and having people donate to the guild leader when the opposite should happen to help players get their mount and gear. this server is too small to have big things like this behind a paywall of this size.

i understand you want to have people come on more consistently but people dont want to grind for weeks on end for essentially extra bank slots, im just surprised at the lack of a backlash and acceptance for such an unreasonable price for it. if you want to introduce new things to the game that arent fully by the masses of people who can potentially find a way to dupe, steal or bug out items in the guild bank then youre only delaying bug testing for it to a date when more guilds would have it. think of the repercussions one unnoticed dupe of items can have on such a small servers economy.

i know my post will likely be ignored or mocked but thats fine, i only learned my forum name and password just for this post anyways. i just hope people can come to reason with the gms for a more reasonable price for a guild bank

by Chlothar
Not everyone is broke Aurrius, is yours a beggars guild? (so much about the mocking) I think all greater guilds can easily afford 5k gold. Maybe 5k is too much but 300g is too cheap if you ask me...thats like 1-2 epics sold on the AH. a guild bank should be of more value. MAybe it could be like 1st bank slot costs 500g, second 1000g - 3rd 1000g - 4th 1000g - 5th 1500g - this way smaller guilds can give a gbank a go and fully use it later when they have taken the effort to enable all bank-slots.

I can donate 50g to your guild Aurrius to give it a start.

by Torta
I know the population is low. Yet the difficulty and the challenges has helped us to survive so far through 2 years. If we're to give freebies everyone, there'd be nothing to bind community together and make players work towards the same goal.

I'll repeat the same I said on Discord: it's 240 slots and multiplayer access to one bank. Bag space is expensive in Vanilla, a lot. It was not meant for small guilds or solo players. You have to cooperate to get this kinds of perk.

Vanilla is not a cheap experience.

However, we're waiting to hear from more people, before we make final adjustments.

by Aurrius
i understand vanilla isnt a cheap experience, thats why we play it, but your purpose for making guild banks has already been defunct by the stated reasons i posted above. this wont stave off bank alts because having bank alts is significantly cheaper. the only guild that can afford that price is thunder ale and they are the main raiding guild where its required to constantly farm mats instead of enjoying the game.

by Torta
Let's hear out what others have to say :) I get your point and keeping it in mind. The release is yet in 2 weeks. We have time to discuss this.

by Chirpy
I think 5k might be a little steep but it's a great feature. Maybe like 3.5k or so is more affordable without making it a cheap experience.

Either way though I'm glad this is being implemented. Thanks.

by Qixel
I think 5k is a fair amount for an entire guild to raise. That's 5 epic mounts, spread amongst a group of people. It's not meant to be undertaken by a single player, even though some people* can probably do it twice.

I do think that if the goal is to stop unimmersive alts, this will not help it, but nothing shy of banning the practice would. Bank alts were a fixture of the game before and after guild banks were added to retail. That being said, I feel that guild vaults will serve as a badge of honor on this server with the current idea for it. If your guild has one, it means your members cared enough about the guild to work towards it, and that's awesome. I'd actually like to see the idea spread a bit to other things, even if I've no ideas at present as to what things those would be.

by Justice
I think 5k gold is too much, I could understand 2-3k.

by Pfwg
5k is fine with me.

I'm a guild leader, I don't have that sort of money. Given time and effort, I certainly could.

We need an end-game gold sink and this is a great idea for one.

by Kells
I help out with the guild bank for Molten Core Salvage Ops. The way it works is that the GM has a bank toon character. A gifted modder (who no longer appears active in the game) wrote some code that allows the bags and bank of this bank character to be displayed on the web. That (former) player also hosts the website. In effect, it appears to be like the Guildtools Addon from the past (that I have never been able to get to work myself). Only our GM can update that website but she gave me the login credentials for the account so I can help disperse items either by trading or mailing. The GM doesn't know how the addon works but it does work. It is an imperfect system at best and there is a time delay as members have to mail requests to the bank character unless our GM (or I) am on. A lot of the members of Molten Core have never bothered to view the guildbank contents on the web, so we end up posting a lot of the content via guildchat (again, when we are on).

So, my reaction is that Molten Core will be very interested in switching over to a true Guild Bank system but do not know if they will want to come up with 5K gold. That will be up to the GM and the officers (I am neither). Still, thank you for adding this feature.

by Kells
Also @Aurrius, I think it is perfectly reasonable to object to 5000 gold.

by Dustywow
I agree that 5K is too steep. I like Chlothar's suggestion of having an incremental payment for more slots. It will allow lower level guilds to share trade goods. I recommend the following: