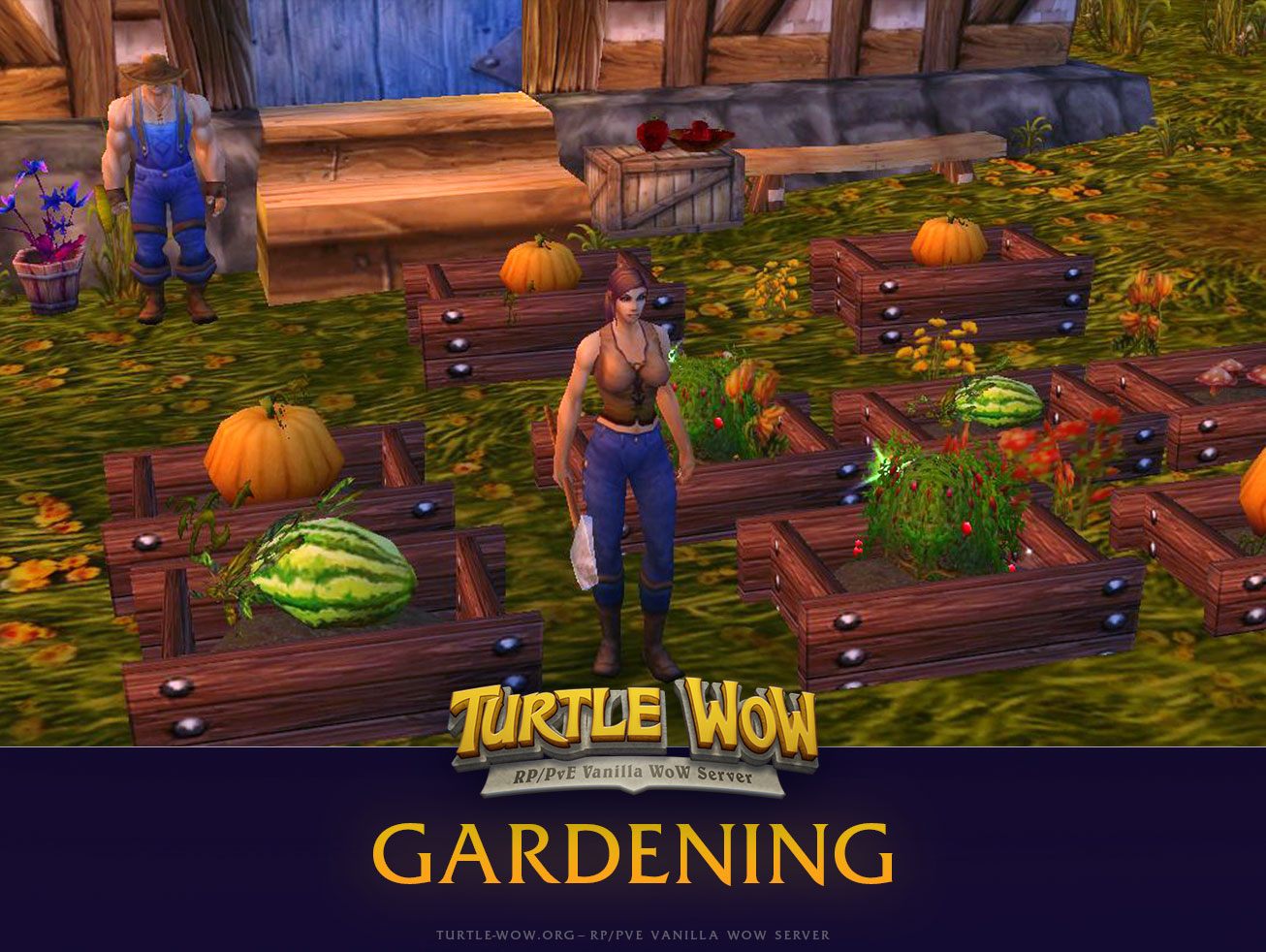 Don’t you love nature? Have you ever had a dream about setting your own garden?
Here on Turtle WoW you have your chance to make your dreams come true!

Grow your own food: plant the seed, water it, foster it, and enjoy the results of your hard work once it’s fully grown! Yummy!

How does Gardening work?

Starting at level 20, take the quest “You Reap What You Sow” in Elwynn Forest or Mulgore.

This little adventure will teach you where to get 4 types of seeds with an accelerated growth rate.

After receiving a brand new shiny Shovel and your first Wooden Planter, you’ll be ready to grow your first pumpkin!

Make sure to have enough Refreshing Spring Water, Un'Goro soil, and of course, Seeds with you. Place the Un’Goro Soil and the Seeds carefully in your planter and be prepared to wait! Every 9 minute you’ll have to water or fertilize the sproutling. And then, harvest it!

You must have Survival Skill (100) to get started with Gardening! 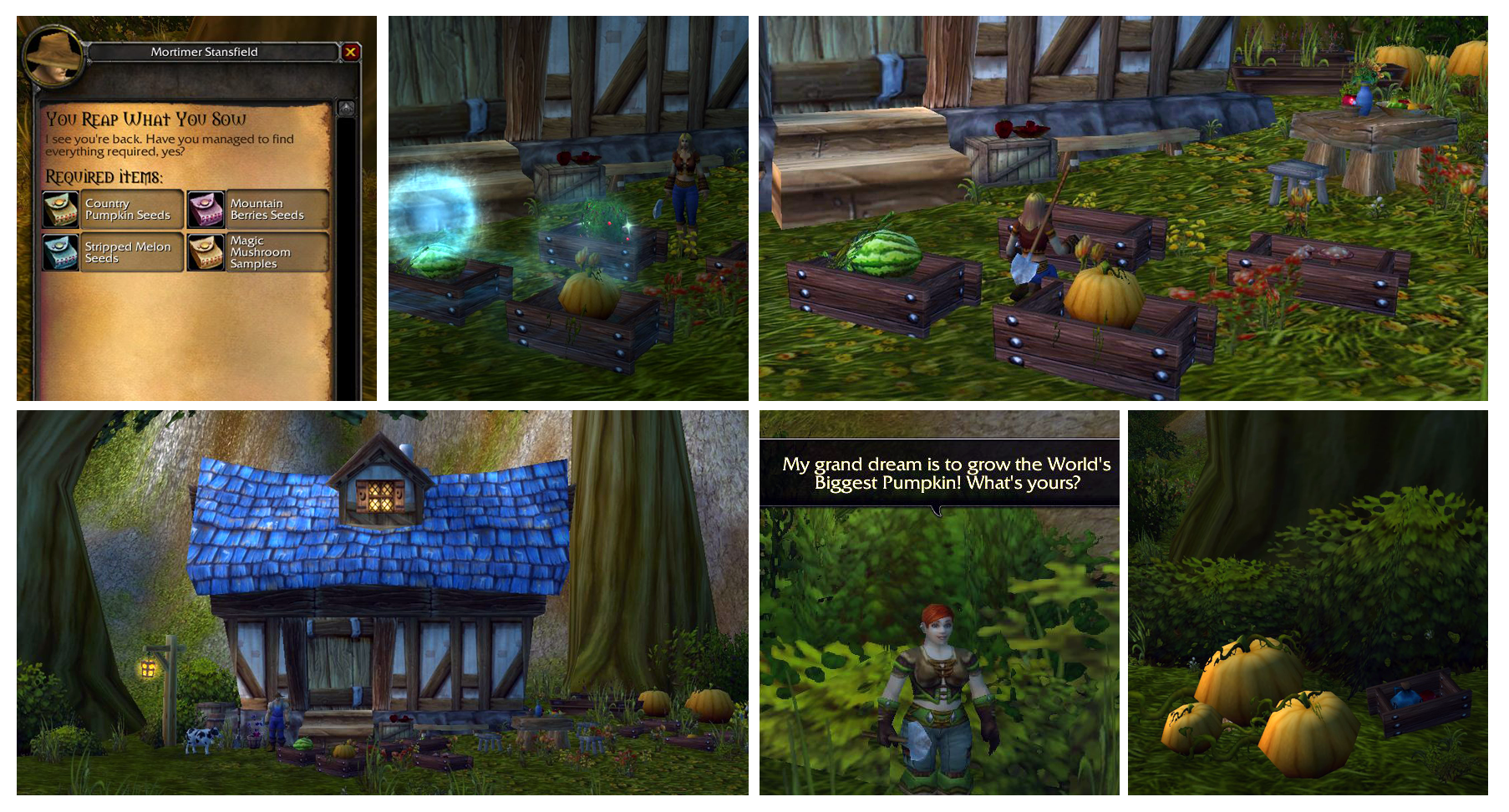 Speak to Kern Mosshoof in Mulgore or find Mortimer Stansfield in Elwynn Forest. 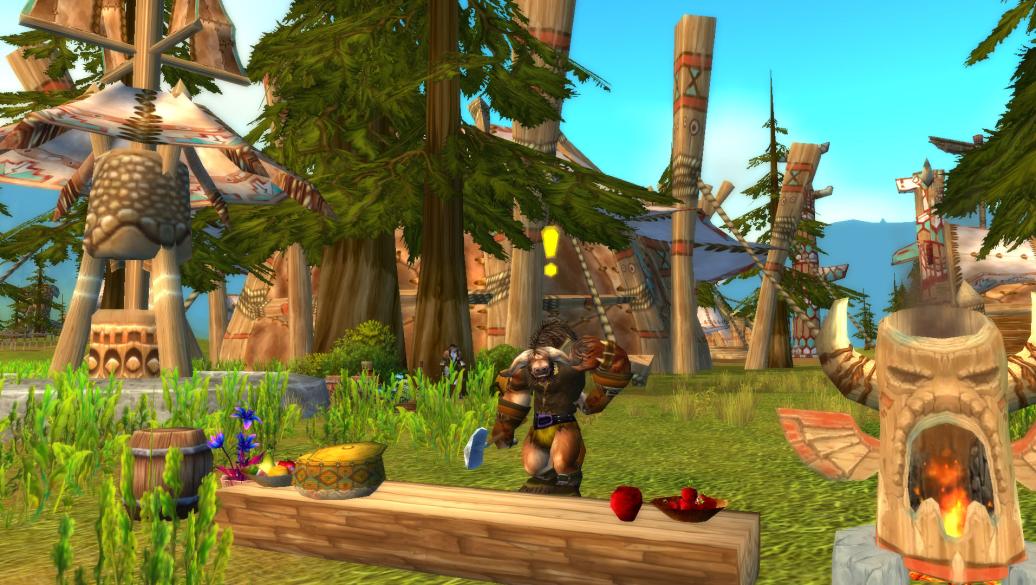 I absolutely love this!
Top

I'll just leave this here for while:

Fantastic! Love the new immersive features. Would like for some woodcutting/working as well to round everything up.
Top

How far from each will you be able to place those?

I'm breaking - er, testing gardening to add it to my unofficial guidebook, and I came across a small bug. Not a game breaking one like the other, but they can't all be world enders. The variant of pumpkins that give 25% of your level stamina and spirit only granted my level 60 character 7 stamina and 6 spirit, rather than 15 to each.

I'll edit this post with other things as I encounter them. Thank you for the new feature. <3 My proclivity for exploiting aside, I truly do appreciate the work you guys put into these things. <3

Small nitpicks: The watermelons and associated seeds should be called Striped Melons. Currently there is an extra P, making them Stripped Melons, which are different.
Top

Fixed extra P, thanks. No idea about bonus yet, will check.
Top

the 25% of your level stam/spirit buff is broken for xmass/halloween buffs aswell, most likely is the same buff

Updated post with the information where to find Gardeners :)
Top

I have messed around a bit with gardening. The gist of my feedback is that it is an underexplored, fun, and interesting system that currently yields no rewards whatsoever despite requiring so much time and money to get a final product.

Firstly, let us set the cost. Creation of each farming node to get to a final product is 22.588 silver plus an Un'goro Soil (around 10 silver at the time of this writing, being generous); total monetary cost for a node is 32.6 silver (rounded). As for the time cost, it takes 27 minutes for a node to fully mature.

Secondly, the final product. There are four kinds of seeds and each gives two final products. One is similar to foodstuffs obtained through cooking (stamina and spirit buff) and the other is unique to the seed. For example, berries grant 10 Agi whereas melons grant 10 Int. Those do not seem that great, although they could be slightly useful in case they can easily stack with other buffs (e.g. from food).

Still regarding the final product, they cannot be sold to NPCs but can be traded. However, as cited above, their buffs are not that great and require a relatively steep amount of time and money to produce, therefore I doubt someone would wish to buy, let alone for a profitable price. Mind you that the tests above were done at level 60 at 150 survival (in case it scales with survival, I do not know).

On a side note, I would like to point out that I am not considering the Magic Mushroom Spores, as those can only be obtained through NPCs and cost 2g50s each (!). I have only purchased those once in order to complete the gardening quest.

Finally, I would like to present a few directions in oder to improve the system:

Great post, thank you. I'll keep it all in mind next time making changes to Gardening.
Top

Has there been any tweaks to guardening sice or is this still acurate?
Top

I don't know if it's intended, but planters require reagents to place, in addition to the planter, since the patch.
Top
Post Reply
21 posts