As the governor of the Alliance principality of Hearthglen, Tirion lived a comfortable life, well-respected by his subjects and loved by his wife Karanda and son Taelan. Both a great warrior and a just ruler, Tirion was renowned throughout the Kingdom of Lordaeron. In spite of his acclaimed military prowess, Tirion's experience as a paladin during the orcish invasions had taught him to value peace. After the wars were over, Tirion prayed every night that no conflict would ever bring harm to his subjects again.

One day, he encountered an old orc hermit living in an abandoned tower. The two immediately battled and traded blows until a piece of the ruined tower collapsed on Tirion, knocking him senseless. He awoke in his bed days later and discovered that he had been found badly beaten, tied to his saddle, and had been healed by his ambitious second, Barthilas.

Realizing that the orc had saved him from the ruins, Tirion set out and retraced his steps back to the tower. The orc Eitrigg told Tirion that, before the coming to Azeroth, the orcs had been a noble society rooted in shamanism. After the war, he had left the corrupt Horde. Tirion, seeing great honor in Eitrigg, promised to keep his existence a secret, returning to his people and informing them that the orc had been dealt with and was not a threat. 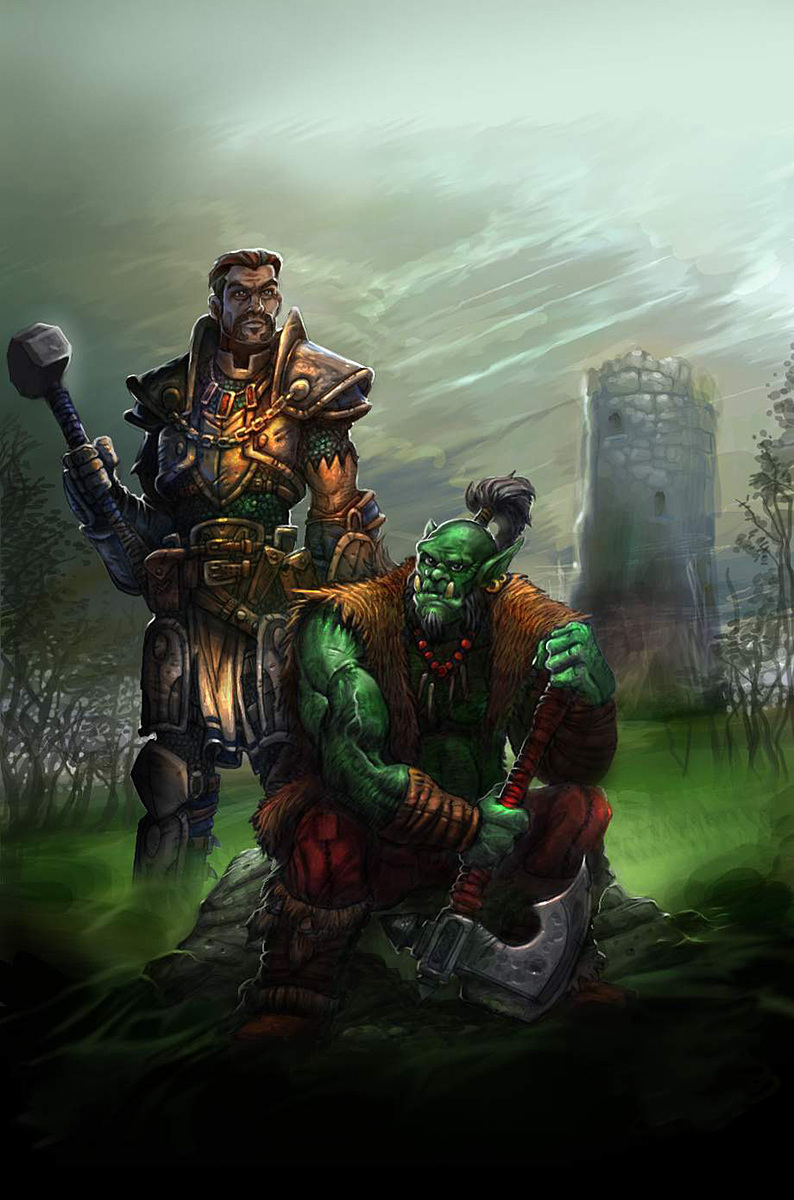 Barthilas was not so confident, and called Saidan Dathrohan to come and settle the matter himself. Dathrohan picked up the trail and led a group of hunters into the woods, where they found Eitrigg. During the orc's capture, Tirion fought against Dathrohan's men, prompting Barthilas to gleefully note that his actions were treasonous. Tirion was brought to Stratholme to stand trial.

Despite the pleas of both Karandra and Mardenholde Keep's captain of the guard and close friend Arden to forget his honor and tell the jury what they wanted to hear, Tirion, hoping to be an example to his son, told the court exactly what had happened. Ultimately, the jury of Admiral Daelin Proudmoore, Arch-Mage Antonidas, Archbishop Alonsus Faol, and Prince Arthas Menethil decided that since Tirion had assaulted Alliance soldiers, he could no longer be a member of the Knights of the Silver Hand and was doomed to exile. Uther the Lightbringer performed a ceremony to strip Tirion of his powers and sent him home to gather some supplies. However, as a last token of respect to his friend, Uther did not exile Tirion's family for his crime.

After returning home, he bid a farewell to his son and wife. Desperate to prevent Eitrigg from being executed for war crimes, Tirion rode back to Stratholme, where he attacked Eitrigg's guards. Surprised, they still managed to subdue him, until a group of orcs stormed into the city. Tirion used the distraction to free Eitrigg and flee the city.

When they were in the wilds, Tirion saw that Eitrigg was near death, and did the only thing he could do; call upon the powers of the Light to heal the orc who had saved him. To his surprise, he still had the powers blessed by the Light and Eitrigg was saved.

They abruptly found themselves surrounded by orcs and a new Warchief, Thrall, who approached Eitrigg and invited him back into the Horde — which had since reverted back to its shamanistic roots once more. Eitrigg was thrilled to accept. Before he left with his people, Eitrigg proclaimed that Tirion and he were brothers, bound by blood and honor. Through his actions, Tirion also gained the undying respect of Thrall, one of the few humans he holds in such high regard, and which continues to this day.

Tirion remained in Lordaeron, to watch his son Taelan be inducted into the Silver Hand. His son later became the lord of Mardenholde. Tirion's wife told his son that Tirion had died, and even took him to a false grave at the Undercroft, where Taelan buried the toy warhammer his father had given him in his memory.

Many years later, he was secretly present at a ceremony where his son, Taelan, became a paladin. When the ceremony was over, as Tirion was leaving, he was noticed by Arden but he did not take any action and in fact was pleased to see him.

Following the death of his son Taelan, Tirion committed himself to refounding the order of the Silver Hand. The result was the Argent Crusade, an organization consisting of the old Knights of the Silver Hand and the Argent Dawn. Tirion led his new Crusade into battle against the Scourge during the invasion of Northrend and, aided by Highlord Darion Mograine and his Knights of the Ebon Blade, directed the successful assault against Icecrown Citadel which resulted in the death of the Lich King. After the victory in Northrend, Fordring had returned to Hearthglen and directed the Crusade as it worked to revitalize the Plaguelands.

When the Burning Legion began their third invasion of Azeroth, Tirion led the Argent Crusade's forces during the disastrous battle for the Broken Shore but was captured and eventually killed, though not before passing the Ashbringer on to the new Highlord of the reformed Silver Hand.
Top

This story gave me the shivers the first time I've been reading it.
Support the Turtle

That's why I ike them so much.
Top

Then keep'em coming, mate. Let all the other turtles share the feeling on the shells.

I plan on doing so.
Top