Charismatic and beautiful, Azshara outwardly portrayed herself as a kind, generous, loving monarch who adored her people and her empire with all her heart. In truth, however, she was a vain, cruel, power-hungry narcissist who cared for herself above all else. An intensely manipulative individual, she fostered her own benevolent image solely so she could take complete advantage of it. Although she did hold favor for her Highborne and handmaidens, it was not out of love, respect, or any form of benevolence. It was purely out of how useful they were to her. She never hesitated to throw their lives away if it suited her, and such was her power and charms that they would do so for her gladly, completely unaware of her indifference. She held very little loyalty either, as she freely gave her allegiance to the Old Gods so she could survive the Sundering, when she had been one of the most devout servants of Sargeras mere moments before. Of particular note, however, is despite her cruel and dominating personality, she rarely ever raised her voice when angry or made direct insults of her minions.

Perhaps Azshara's greatest ability was her immense charisma and stunning beauty, the latter of which she augmented further through mystical means. Such was her physical and mental appeal that none ever noticed her true personality, no matter how cruel or destructive her commands might be. The vast majority of her servitors were willing to go to any means to elevate themselves in her eyes, even at the cost of their own lives. Demons who were around her long enough fell prey to her wiles and would kill their own kin under her command. Xavius, who considered himself above her charms, was, in fact, completely enamored.

However, Azshara was much, much more than a pretty face. She was one of the most powerful mages to ever walk the face of Azeroth, wielding the arcane with such skill that she is known to have even been able to suppress her magical glow, as proved when Illidan noticed her intensifying it after receiving his new eyes. With barely an effort she shielded her palace from the Sundering, and alter her own body to increase her beauty. So great was her power that when Mannoroth, once growing enraged at her questioning him, attempted to kill her he realized, to his chagrin, that Azshara was far more powerful than he, and that only Archimonde, Kil'jaeden, and Sargeras would prove superior. This power seemingly indicates that she was on a level roughly similar to the Guardians of Tirisfal, and achieved this state on her own.
Top

With thousands of years and almost endless source of power (Well of Eternity) only a very lazy or incredibly stupid wouldn't empower himself. So Azshara isn't anywhere unique on that regard and the only thing one would pay some /respect to her is she at least cared for those who were useful to her.

The Well of Eternity had always been the central part of the night elves' life and culture, but the obsessive Highborne, spurred on by Azshara, began to delve into the magics of the well more deeply- too deeply.

One day the queen was met by her most trusted adviser, Counselor Xavius, who approached her with the idea of using the power of the Well of Eternity to cleanse the world and make it perfect in her eyes. Their meddling with immense magic, however, drew the eye of an interested observer: Sargeras. Seeking to unleash his Burning Legion upon Azeroth, the Dark Titan entranced Xavius, pulling the counselor under his power, followed quickly by most of the Highborne and eventually Azshara herself. Xavius helped the queen communicate with Sargeras, whom she told of her desire to cleanse the world of the lesser races. Sargeras tricked the queen into making a portal from which was launched the first invasion of Azeroth by the Burning Legion, an event which is now known as the War of the Ancients.

Eventually a resistance was formed, but Azshara paid no attention to their efforts. Sargeras dispatched three of his most dangerous minions to do his bidding: Hakkar the Houndmaster, Mannoroth the Destructor and finally Archimonde the Defiler. All three commanded and watched over the Legion and would have prevailed had it not been for the efforts of three night elves: Malfurion Stormrage, the druid; Illidan Stormrage, the sorcerer and twin to Malfurion; and Tyrande Whisperwind, the priestess; as well as three heroes from far into the future: a dragonmage in elf form, a skilled human wizard, and a seasoned orc warrior. 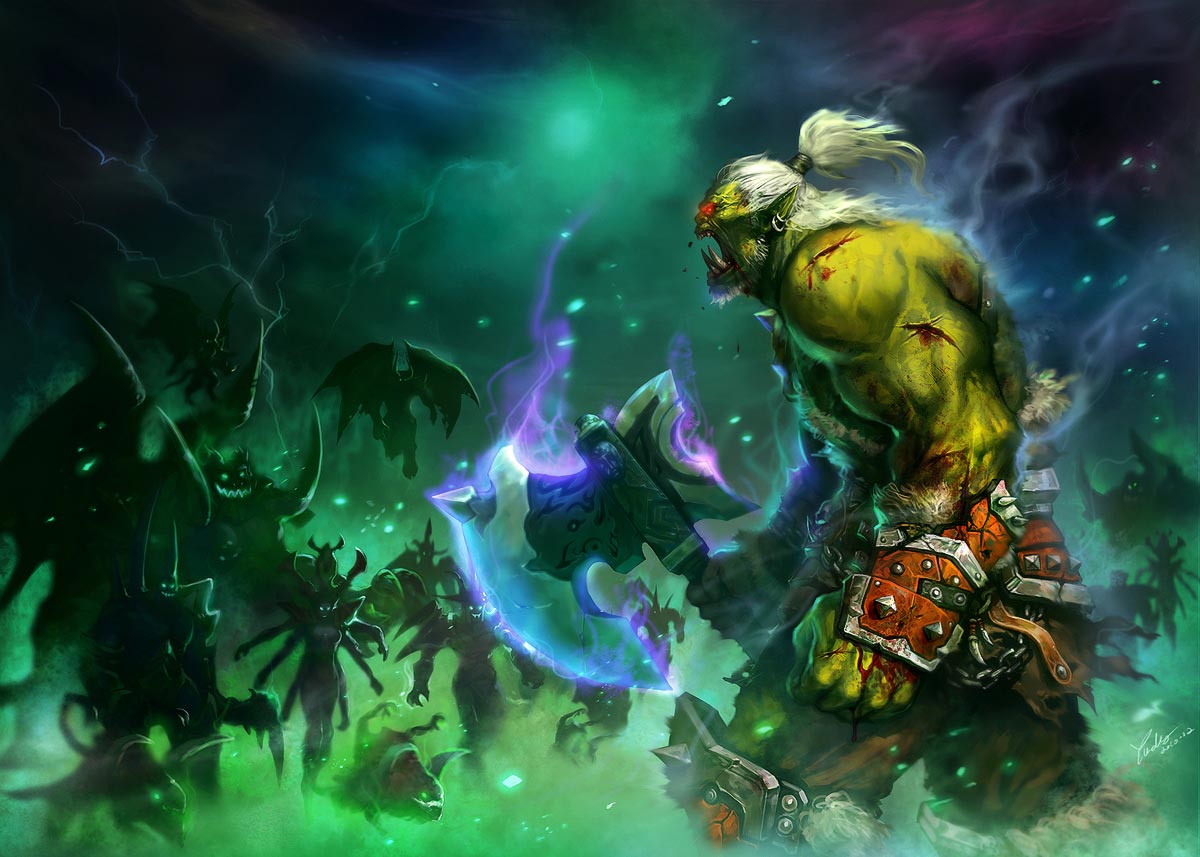 When the portal to the other realm was almost open, the combined force of the night elves and their allies from the future (see War of the Ancients) charged in to destroy it. Irritated by the lack of order, Azshara approached Mannoroth and demanded an explanation. Enraged by both his own failure and the questions asked by the Queen, he nearly attacked Azshara, but quickly realized the folly of such an attempt when he realized that Azshara kept inside her a power to which only Sargeras, Kil'jaeden or Archimonde would prove superior. Azshara forgave him of his minor transgression and urged him on to allow Sargeras entrance to Kalimdor.

Their efforts came too late, however, and the portal was destroyed. The Sundering was upon Kalimdor as well. Realizing that Sargeras would not be coming, Azshara decided not to tell her handmaidens and most loyal followers they had failed. When the black waters of the Well of Eternity poured into the palace, she created a magical shield that would protect her and the remaining Highborne from drowning as the city of Zin-Azshari was deluged.

It was at that time that a dark voice echoed in her head, whispering plans for an escape: "There is a way...you will become more than you ever were...we can help...You will be more than you have ever been...and when the time comes, for what we grant you...you will serve us well..." Her spell collapsed but as the Well filled her lungs she did not drown. She instead expanded with hate and rage, becoming a horrific yet beautiful monstrosity, reflecting the wickedness and malice that had always hidden within her core. 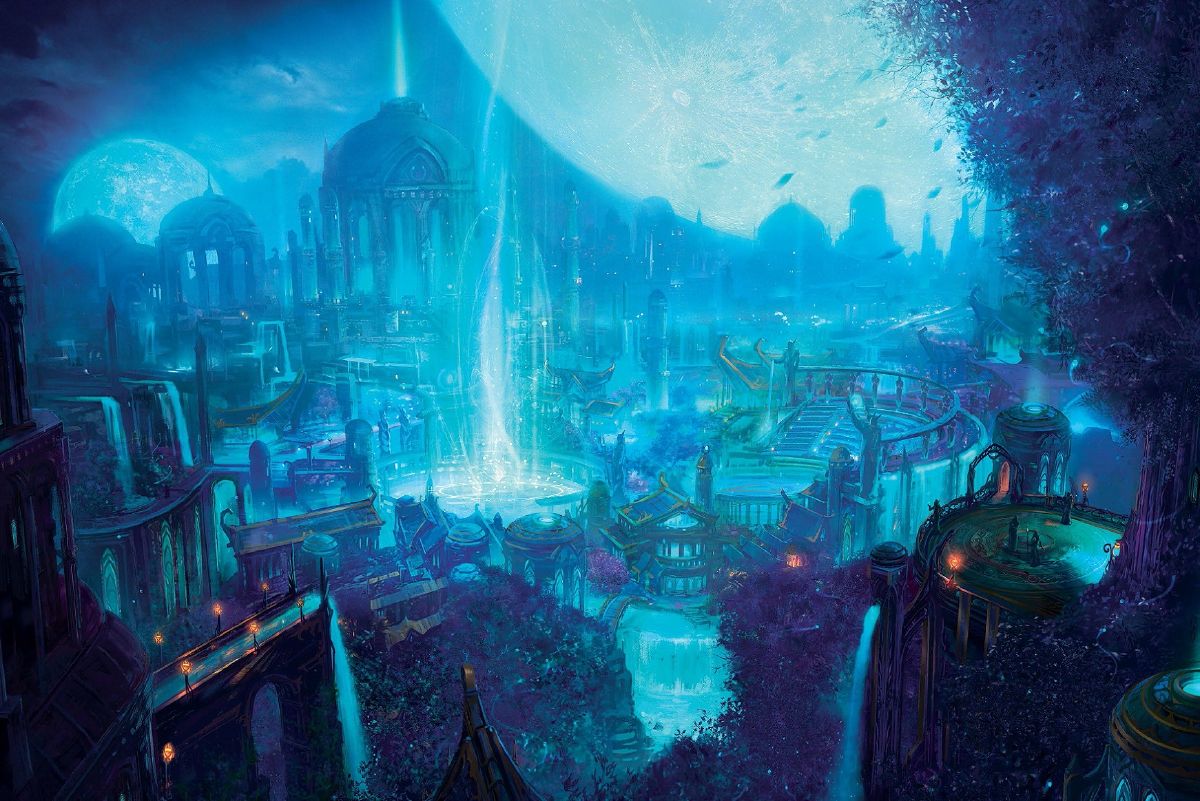 Queen Azshara, her handmaidens, and many Highborne sunk into the sea. The Old Gods chose Azshara as another useful tool and transformed her, her Highborne, and her Handmaidens into Naga. The mighty Queen Azshara still lives and rules the naga. Once she awoke at the bottom of the sea, she ordered a palace built to rival her home in Azshara.

After the sundering of the world, however, and for the thousands of years since, Queen Azshara lives still, in the vast city of Nazjatar at the bottom of a deep ocean trench. She has embraced the power of the naga, grown in size, and possesses many tentacles bedecked in jewels and items of power. She plots her revenge on the treacherous Night Elves, biding her time until the growing might of the naga can be brought to bear. Living under the sea, she has become queen of the naga.

In her new form, Azshara stands over twenty feet in height and moves her scale covered body on five slithering, octopus-like tentacles. Four arms now extend from the torso, with two hands holding javelins of dark polished wood and gold-leafed tips. Like her Sea Witches, Azshara's head is crowned by writhing serpents. Despite her monstrosity, her face still possesses the same elven beauty she always had.

When Azshara finally decided to make the naga's existence known, she sent Lady Vashj to establish contact with the surface dwellers. She yet seeks revenge against the night elves who defeated her, slowly readying her naga subjects in Nazjatar to show their might to all of Azeroth. The world grows wary of what the changed Azshara may attempt in the coming future. It remains to be seen if Queen Azshara might still be found among the naga.
Top
Post Reply
3 posts • Page 1 of 1