Not long after the night elf druids entered the Dreamways of Ysera's Emerald Dream, high priestess of the Sisters of Elune, Tyrande Whisperwind, assembled a powerful fighting force from amongst her night elf sisters. The fearless, highly trained warrior women who pledged themselves to Kalimdor's defense became known as the Sentinels. This period in history became known as the Long Vigil, and ended when the druids were awakened prior to the battle for Mount Hyjal.

The Sentinels included a number of night elves who had fought bravely during the War of the Ancients. Chief among them was Shandris Feathermoon. Orphaned during the Legion's invasion, she was taken under Tyrande's care. Young Shandris distinguished herself in combat time and again throughout the conflict. Her heroics earned her a place at Tyrande's side thereafter, and when the Sentinels were forged, Shandris was named captain of the fledgling order. 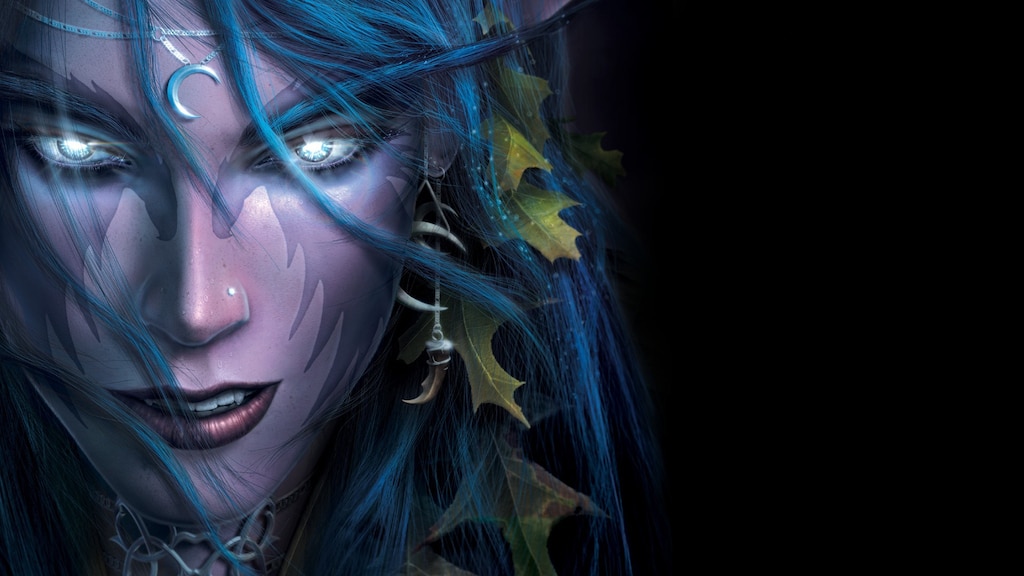 Shandris was stirred from her long vigil by the Orcish Horde. When they began to assault the forest, Shandris and her Sentinels attacked.

During these battles, the combined might of Grom Hellscream, infused with the blood of Mannoroth, and a vast army of blood-crazed fel orcs managed to kill the demigod Cenarius after a long and arduous combat.

Horrified, Shandris and the Shadowleaves retreated deeper into Ashenvale to warn the high priestess, Tyrande.

Tyrande quickly surmised that the invaders must leave. Shandris loyally obeyed, and together, they sensed a looming darkness. Shandris believed it to be the demonic orcs who killed Cenarius, but Tyrande was still unsure.

Shandris remained deeper in the foothills of Hyjal while Tyrande took care of the human and orc problem. But her encampment came under heavy attack by the undead and they barely beat them back. When Tyrande arrived with the survivors of the demonic attack, she knew that the time had come to awaken the Druids once more. Shandris stayed behind to defend Hyjal and the World Tree, Nordrassil, while Tyrande went out to awaken the druids.

Shandris bravely fought back the demons and undead, until she saw a massive demonic force amassing at the base of the mountain. Just then, Tyrande and Furion arrived with human and orcish allies at their back. Together, they formed a plan to dupe Archimonde into destroying himself.

Jaina defended the human base, while Thrall took charge of the orcish encampment. Shandris was next to Tyrande, constantly on the front lines. First while defending Jaina's encampment, then while defending Thrall's, Shandris' arrows were the death of many demons. At last, when both Jaina's and Thrall's fortifications were broken, Shandris and Tyrande, along with the rest of the night elves, retreated to the peak of the mountain. Shandris fought fiercely in the very last battle, when all night elves, ancients, furbolgs, and even dark trolls stood combined against the might of the thousands of ravening demons that came against them. When Archimonde himself came, Malfurion quickly cast a spell that teleported all night elves and ancients to the safety of the shadowy forest. Archimonde, overconfident from his supposed victory, stepped up to Nordrassil and prepared to consume its energy. Just then, Malfurion activated his trap. Thousands of the night elves' ancestral guardians swarmed up from the forest and destroyed Archimonde. Shandris, a great hero of battles, and now the Third War as well, helped Tyrande in retaking the night elves' grounds and rebuilding their settlements. She remained in Kalimdor as Tyrande and Malfurion chased Illidan from the Broken Isles, through the Plaguelands, and into the ruins of Dalaran.

Shandris was born in the village of Ara-Hinam. She was only 16 years old when the Burning Legion arrived and destroyed her settlement in the War of the Ancients. Her entire family was killed in the attack and she was one of the few survivors who fled south, chased by the ravening demons. Fortunately for the refugees, the pursuing Legion was intercepted by Kur'talos Ravencrest and his combined night elf forces, slaughtering the demonic army.

The survivors of Ara-Hinam joined with the defenders. Shortly thereafter, at the defender's camp, a lonely and bitter Shandris, was found by Tyrande Whisperwind, priestess of Elune. Tyrande became fond of the young girl, and couldn't bear to simply let her remain among the survivors alone, and so she accompanied the priestess. Shandris soon started to idolize Tyrande and followed her everywhere she went, learning the arts of divine magic and healing from the goddess-touched Tyrande. Shandris wanted more than anything to take part in the battles, but Tyrande forbid it, so she secretly followed the Sisters into battle, looking on from the shadows. Shandris' secret tours were discovered by Tyrande, and the priestess told Shandris to never again put herself in such danger. Shandris reluctantly agreed. However, just before one of the most important battles in the war, Shandris grabbed her bow and ran after Tyrande after watching her ride away...
Top