Want to be sure you're using the latest and greatest of Turtle Tech (tm) without having to manually delete your WDB folder every so often or when switching between servers? Well, there's a few methods to 'fix' this issue:

Change WDB's permissions so that nobody can write to it. To do this, right click WDB, hit Properties, go to the Security tab, hit Edit, and you should see a window like this. Change every group or user's permissions to DENY write access. Save and you're finished. (Also make sure WDB is empty, delete anything inside) 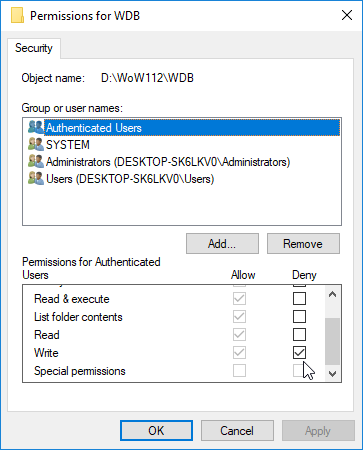 If the above trick doesn't work for you for whatever reason, make a text file anywhere like Desktop or in your turtle wow directory. Call it Vanilla Wow Launcher or something. Edit it, post the following inside:

Save it. Rename those file paths to whatever makes sense for you, obviously, based on where you have your 1.12 WoW directory saved.

Rename the file's extension from .txt to .bat (you'll have to have extensions showing for this).

From now on, run WoW from your new .bat file instead of the .exe. It'll now delete WDB, launch WoW, and rebuild it.

What is WDB and why do this?

It's just a local cache folder. All that means is that the first time your WoW client sees a creature's name, or your items descriptions or cooldowns or a tooltip of an ability or whatever, it saves that value to your WDB folder so that instead of pulling data from the server the next time you log into the game to figure out what everything in the world 'is', it just uses that local file. In short, it saves a small amount of web traffic.

The reason you want to do this is because conflicts can happen and your client will believe incorrect information. For example, a lot of people didn't clear WDB when Survival was introduced, and incorrectly have items that do not work because they claim to require Survival 25 when in fact they only require Survival 1. Also, if two servers have conflicting information about an item, your cache wins and the server loses, and you always want the server to win.

It's entirely safe and the only side effect is a few extra megabytes of web traffic.
Last edited by Distortedshadow on Mon May 13, 2019 1:30 am, edited 5 times in total.
Belladonna Wintersong
NE Warrior
Takoda Mistmane
Tauren Shaman
Top

And if you launch two clients? There is no problem deleting the folder "WDB" while the other client is running??
MAYBE it works if just emptying the WDB folder (with DEL instead of RMDIR )?

Then we have the problems with open files in WDB. This probably means not being able to delete files or remove directory.
I.e. that .bat file is probably not "general" - probably doesn't work in dual launch situations ... might even lead to serious problems.

A side note: I have never been able to solve any problem by emptying WBD. I doubt it's very important to do at every launch.
Top

Hey Musse, thanks for the reply.

Deleting WDB at runtime will cause no problems. Even if it would (ie the file is actively being read, which they won't be) the bat file simply not delete the directory. You can test this yourself by running the game and deleting the WDB cache mid play.

Deleting your local cache can never lead to serious problems, but not deleting it can, if you don't (at a minimum) delete it when you switch servers or when a content patch is released.

You probably just haven't been aware of the issues not clearing your cache has, but they will result in conflicts.
Belladonna Wintersong
NE Warrior
Takoda Mistmane
Tauren Shaman
Top

I should also add that because Turtle WoW has custom content, your WDB will directly conflict with other 'vanilla' 1.12 servers if you're using the same directory to connect between them. You absolutely should delete it every launch in that case.
Belladonna Wintersong
NE Warrior
Takoda Mistmane
Tauren Shaman
Top

Seems you are right that the there is no problem deleting WDB during "runtime".

I even tested to make the WDB folder read-only (file security):
If the WDB files are so "destructive" this must be the easiest way? No files are written to the folder.
I just tested, seems to launch game, and everything is working fine. No files in WDB.
Top

You're right, doing that does work. I didn't even think of changing the actual folder permissions. I'll append that to the guide at the top as the easy solution, thanks!
Belladonna Wintersong
NE Warrior
Takoda Mistmane
Tauren Shaman
Top

Change WDB's permissions so that nobody can write to it. To do this, right click WDB, hit Properties, go to the Security tab, hit Edit, and you should see a window like this. Change every group or user's permissions to DENY write access. Save and you're finished. (Also make sure WDB is empty, delete anything inside)


Changing every user's or group's permissions this way to complicated. And the more complicated, the bigger risk you don't remember what you did. Simple solution is put write deny for "Everyone" (user). That way you only changed one user/group.

I tried changing all the groups and users acces as said in the "easy mode" tutorial. Now I can't open up the application with the warning sign "This application can't be run as you may not have access to one or several files".
I gave up and try to re-install Turtle WoW just to be met with another warning that i can't delete the files as i'm not administrator.

I must have done something terribly wrong, any way to troubleshoot this?

I searched and cannot find any WDB files in my TurtleWoW folder. what should i does?
Top
Post Reply
11 posts • Page 1 of 1