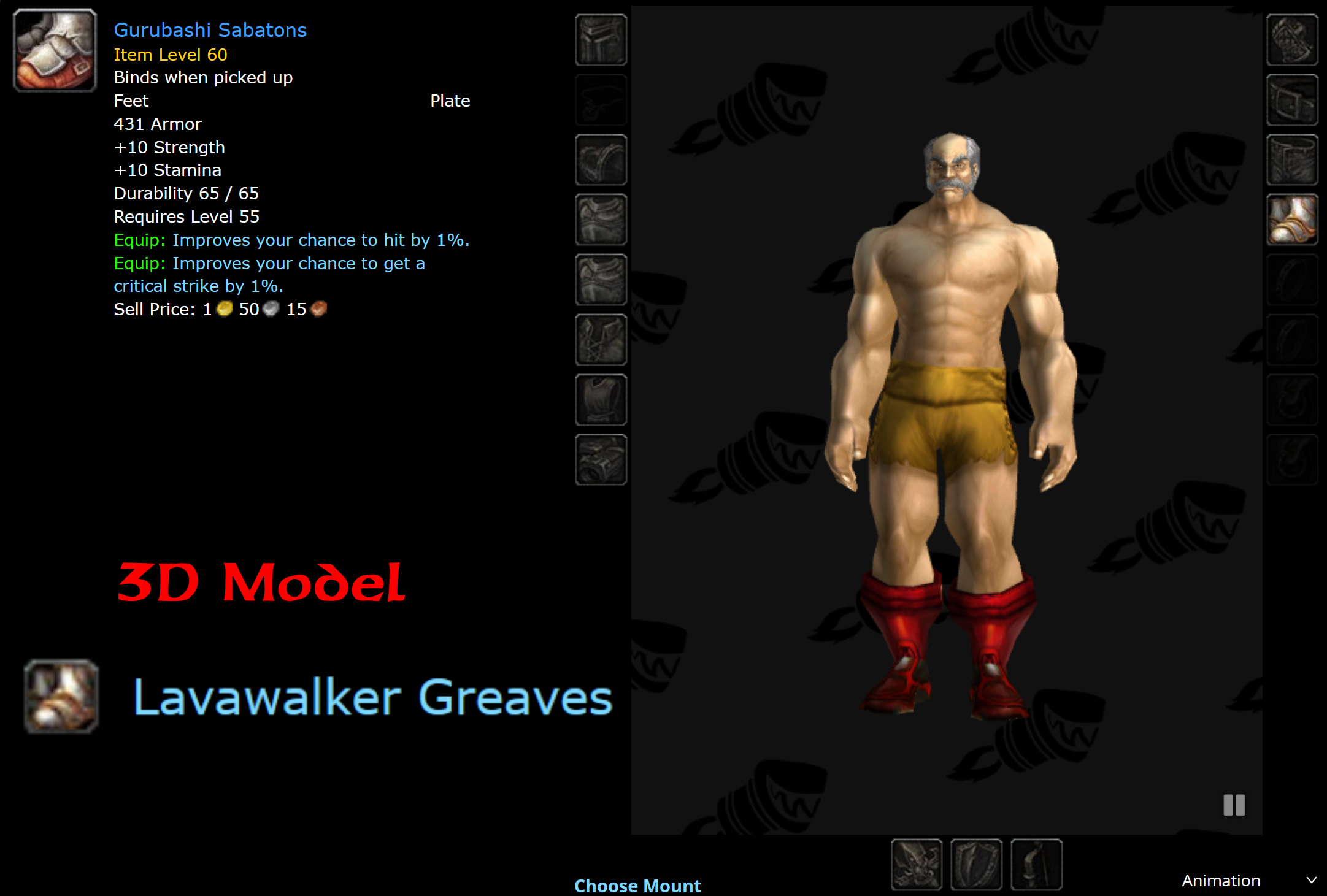 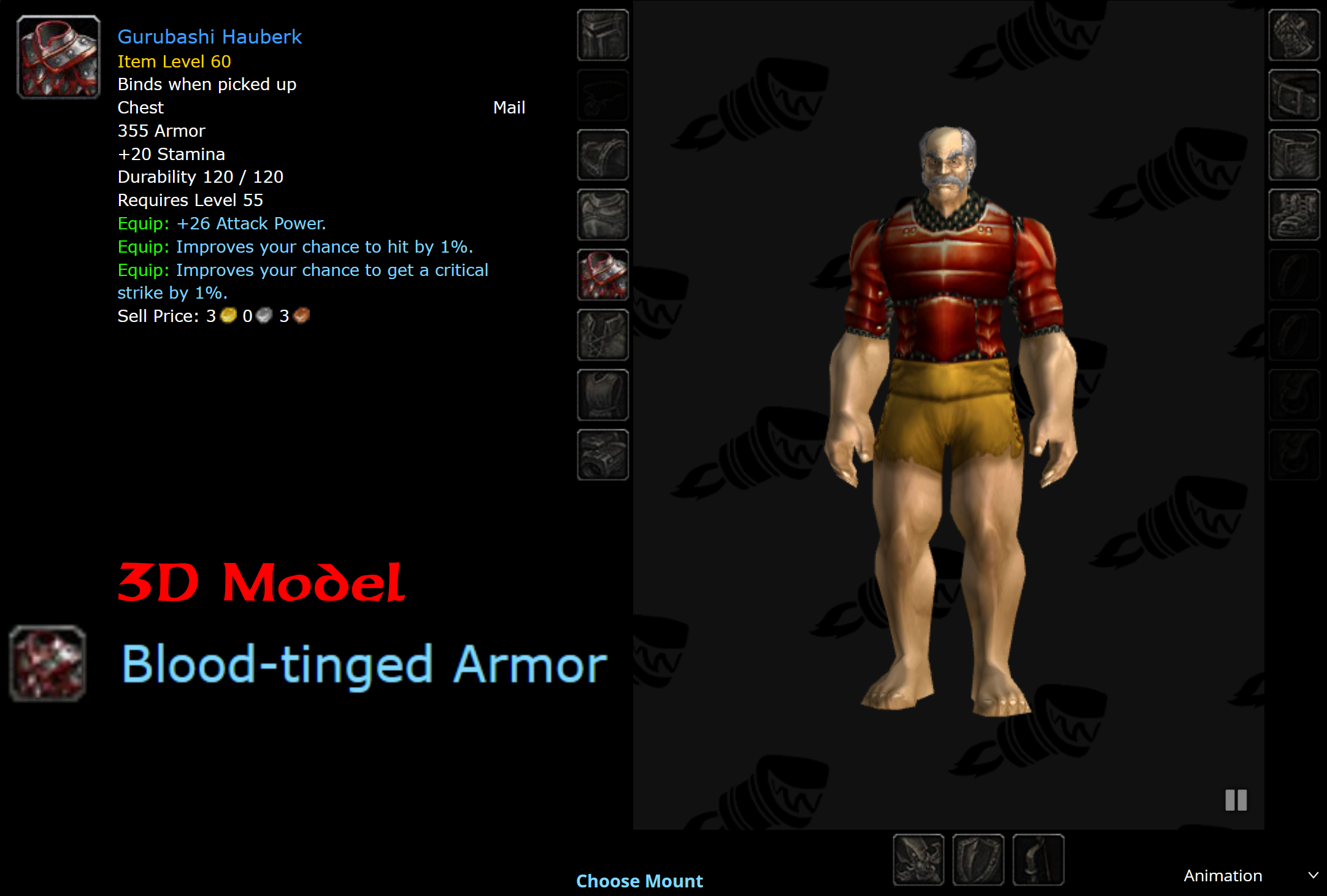 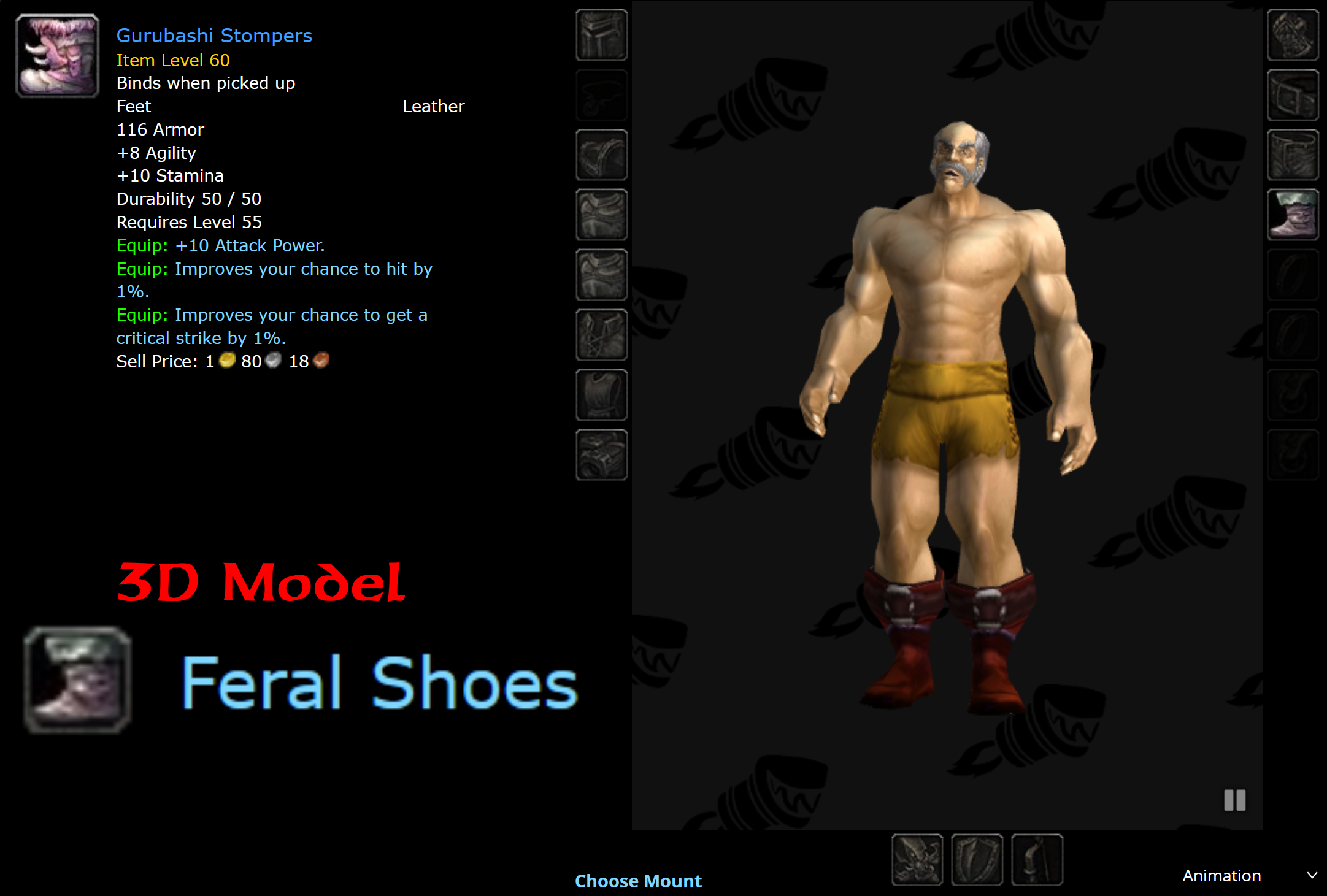 There is a hole in hit and spell hit gear for pre-raid gear up that these items help fix while also giving more meat on the bone for the Gurubashi Arena after the ZG raid items vendor was removed. All of these new reward items are meticulously attribute budgeted within their proper item level and rarity itemization formulas.

Also questing green and blue arena rewards could easily be added to give content for all level ranges along with companion pets and other cosmetics. This area could breath live into causal use for the arena after a dungeon or meet up at the area:-).

The idea here is to treat the Gurubashi arena as the Battle Grounds and Arenas are treated in retail Classic and TBC with useful item rewards while still allowing for dungeons and raiding to be required to progress any character. The arena should not give an easy way to farm honour, yet while still having a useful niche to help people gear up for raids. The more feedback the better.
Top

People abuse the arena and win-trade.I don’t see myself supporting something that could be easily abused.

In terms of more item additions, I’d like to see more items be added to the loot pool of world bosses, dungeons, raids, etc. There are a lot of unused models, like glaives, blindfolds, helmets, that would make for cool new additions.
Chieftain of the Dreadskull Clan
viewtopic.php?f=23&t=552

Yeah I would like to help make new items for raids, dungeons and bosses. I can make any level of item properly budgeted; perhaps I might make items for the Caverns of Time Dungeon.

Maybe some tradable tokens (like how zg coins work) from the chest in the Gurubashi arena can be collected and redeemed for the Gurubashi hit armour; the chest timer could be something to prevent win trading spam XD. Also random leveling gear could also drop from the Gurubashi chest; kind of like a rare mob but with a huge level range XD.

Also perhaps bloodcoins could only be used for pets and cosmetic items (tabard, goblin and troll disguises) with maybe a mount as the top reward? So even if win trading happened the rewards would not affect gameplay?
Top

Kazgrim wrote: ↑
Wed Jan 01, 2020 5:12 pm
People abuse the arena and win-trade.I don’t see myself supporting something that could be easily abused.

I'm 100% in favour of new and exciting items, but we've had more than enough dishonest PvP already and we don't need to encourage more.

I'd love to see these items added to ZG trash loot tables though. Still within the theme but without abuse potential. Or you could trade them for Zandalari Rep Tokens or something!

Similar themed ranges for other high level places would be good too.
Top

Yeah maybe a 10-man world PvE boss that spawns in Strangle Thorn Vale. Kind of like the Turtlhu boss but something troll themed. Maybe a big berzerker troll; I have fond memeories looting the big troll berserkers in ZG and getting the ring.

Also wow could use some 10-man content; this server would love it. One tank, a few healers throwing heals up or one good healer and maybe a back up tank if the tank dies and a big group of dps it would be great! XD. It would be like a more intimate world boss. Maybe he spawns near the arena on the chest down time XD.

I even really like the design. If I might suggest some mechanics (Somewhat inspired by a particular WotLK boss):

The boss obviously cleaves (they all do

), so has to be turned away from the raid. Every X seconds, he does a ground stomp, briefly stunning anyone in a 10-15 yard range and dealing a not insignificant amount of nature damage. In general, a nice and controllable first phase.

At 50% HP and every 20% thereafter (ie 30% and 10%), Zug'Mug will grow in size, reducing his damage taken by 99% and doing a huge knockback to all players besides the one who is currently tanking him, knocking them into the spectator stands outside of the arena proper. He will then target a random player (That isn't the current tank) and run towards them at around 75% of player running speed for 30s, doing a series of ground stomps that will easily kill anyone that stands too close to him. After he calms down, He will return to the tank who's been stood enjoying watching everyone run around like crazy and the fight resumes. Do this 2 more times and he goes down.

The idea would be a fight that's not hard to dps through, but more requires players to keep their eye on the boss and run away from him while he's enraged. The idea would be that getting to each of the HP breakpoints isn't an issue, it's making sure you join in the crazy running around part of the second phase and staying alive. I imagine him as not hitting too hard, not having tonnes and tonnes of HP or anything, the only difficult part being running away when he goes crazy and re-positioning back into the arena afterwards.

An alternative idea would be the same fight mechanically, but with the boss being a huge sack of hit points, the idea being that players would die perhaps once or even more during the fight and the arena priests would resurrect them to rejoin the fight

Oh that is amazing! It is so nice to have people pitch in how to make things better XD.

Those boss mechanics sound great! I like the boss timer and the neutral mob boss part after the fight and the part where he throws players back like in MC but hopefully with slowfall so everyone has to run back into the arena. I would also put him at level 60 so to not require the usual ~8% of hit gear to better help with gearing fresh 60's and characters starting to raid. Also rewarding hit gear would make sense in this regard to help people get into raiding; I feel that this is what 10-man content should do; help transition and gear up dungeoneers into raiding XD.

I like the idea of a boss that teaches raid mechanics. I really like this point:
"The idea would be a fight that's not hard to dps through, but more requires players to keep their eye on the boss and run away from him while he's enraged. The idea would be that getting to each of the HP breakpoints isn't an issue, it's making sure you join in the crazy running around part of the second phase and staying alive. I imagine him as not hitting too hard, not having tonnes and tonnes of HP or anything, the only difficult part being running away when he goes crazy and re-positioning back into the arena afterwards."

Lol have a mechanic where if the dps pull threat off the tank they get 'killed' with a charge smash (-2000 hp physical damage and an extra -500 physical damage small aoe smash with ~2 or ~3 minute cooldown). Perhaps use one of those 'ground stomps that will easily kill anyone that stands too close to him'. It would be like a toned down version of the raptor boss in ZG or Patchwerk in Naxx but with highest threat (if that can be coded, if not or maybe even just every 2 minutes and highest threat to make the tank and healer work together and have the dps stay on task). Also this would teach the healers in a comfortable way how to plan for big preemptive healing (used in Naxx and other raids later) and have to res to teach them to watch threat while also being kind of funny and inspiring group cooperation like in end raids XD XD XD.

Also he should have a quest item (Zug'Mug's Mark of Exile) that everyone can pick up (with the quest handed into the arena announcer); so that the first time a player kills the boss they can get a quest reward (ring or necklace; something like that). Every time after that is a bonus with the regular loot pool. If the raid boss cannot drop a raid wide quest item then a quest to slay him and take his head like the ZG channeller's head quest.

It sounds great to teach tanks to grab the target back as well (used later to save attempts when the tank dies or someone pulls off tanks XD). Yet still comfortable to dps through and tuned for fresh 60 dps but with mechanics that teach raiding XD. It is fantastic!
Top

Thank you for your kind words

Mechanically difficult fights make better players, gear check fights make frustrated players. Also with the server and the raiders looking to move into BWL, AQ and ZG, fights are about to become much more mechanically intensive so some 'easy' training bosses would be really good!
Top

That is a great point Pfwg! Having mechanically difficult fights would really help new players train for raiding and also after Zug'Mug The Bashinator is defeated the 10-man group is at the arena and it could spur some extra pvp on the side XD.
Top
Post Reply
10 posts • Page 1 of 1