Following patch 1.6, this is my understanding of the new Boat/Zeppellin routes to travel between 2 continents. 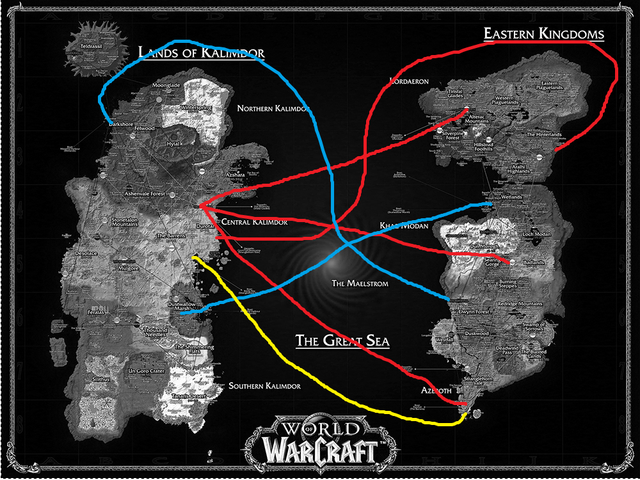 We can clearly see how much horde has a huge advantage. Orgrimar was already a inter-continent hub with 2 Zepellins, it is much more now with a 3rd Zeppelin and the new Gobelin port.

The alliance had only one boat hub and it was Menethil. Now it can't be considered as a hub anymore because you removed the boat from Menethil to Auberdine. New Stormwind's harbour is a complete joke in the actual state. It can't be considered as a hub either because it has only one liaison to Auberdine, which only deserves quickly the north of Kalimdor. The point of a hub is that you have MULTIPLE liaisons, just like the horde has. It is even more questionnable, considering that the Stormwind Harbour has 6 decks, and you only use one, and Auberdine has 3 decks and you only use 2.
So why have you removed the liaison from Auberdine to Menethil at all?
And why there isnt a liaison from Stormwind to Theramore??? I mean those are 2 important human cities, and its totally logical from the lore. Theramore do have empty decks you can use.

Now there's no reason anymore to have your Hearthstone in Ironforge. Unless you are a mage or an engineer, you have to heartsone Stormwind, which is what everybody will do. But then if you want to travel to Kalimndor center or South, you have to either :
* Fly BB and take boat to Ratchet
* Fly Menethil and take boat to Theramore.

Which is long and boring. I wouldn't mind if horde didn't had received 2 new very interesting routes added from Orgimmar, while alliance has nothing except a "switch" that is not interesting.

So the only way to try to balance this and makes Stormwind a real hub, would be this : 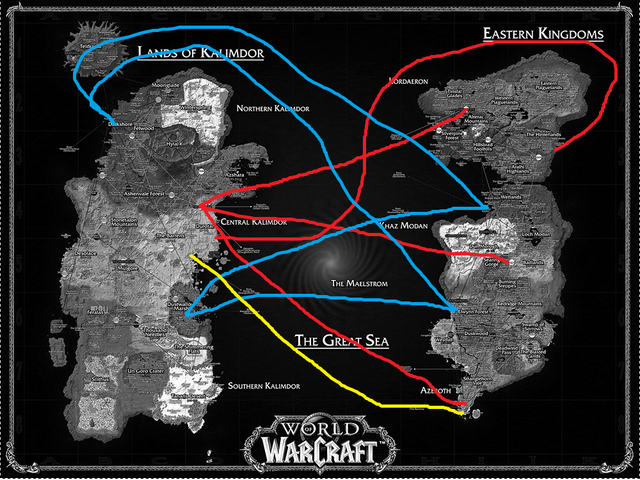 And that is basically 2 things:
1. Restore the boat Auberdine/Menethil
2. Add Stormwind/Theramore
The decks are there in the 4 harbors to do this.

And even in this new configuration, the horde would still be advantaged because Orgrimmar has 4 routes while stormwind only has 2.

With the removal of the Whormhole and this boat change, it has become a pain for alliance to travel to Kalimdor. This is clearly a downgrade from original Vanilla where you had Menethil at 2 minutes of IF to travel either North or South of Kalimdor. And I just can't be used to it.

I had highly expectations in Stormwind harbour because this was a clear missing component in original vanilla. But this is now a huge disappointment. This harbor has no purpose. It is long and boring to run there from SW bank,and it is just for one boat. The fact that there's no liaison to Theramore is absolutely not understandable to me, it was clearly the first thing to do.

If those boat routes were that much of a nightmare work like Torta said on Discord, the question is : why have you worked like this? Instead of removing one TOTALLY FINE existing liaison to replace it by an almost useless one, and working on a new unnecessary liaison for horde (to Hinterlands).... you could just have added the real liaison missing from a Geographical, faction balance, and LORE point of view : SW/Theramore !

With a heavy heart we have to announce that the Wormhole and Ardent Watch teleports have been discontinued. We believe that exploration and travelling is a crucial part of the game that shouldn't be undermined as often as we did in the past. See below to see additions we've made to compensate for the removal of these teleports:

is utterly true for horde, and totally false for alliance.
Hordes takes it all, and travels are now outrageously unbalanced.
Last edited by Duvel on Tue Dec 28, 2021 1:10 pm, edited 3 times in total.
Top

I actually like Stormwind harbor and the new boat.

Maybe Turtle Wow should give Menethil harbor boat back, and add a new boat from stormwind harbor to Darnasus.
I find it convenient to go from Darkshore to Stormwind too.
Top

how about a SW -> Feathermoon stronghold boat?
Top

Not a bad idea
Top

For new destination you have to consider the available decks on the port. Its hard to add more boats to Feathermoon and RUtherean because they only have one deck. Although the utility of the Feathermoon boat has always been questionable
Top

Duvel wrote: ↑
Tue Dec 28, 2021 2:40 pm
For new destination you have to consider the available decks on the port. Its hard to add more boats to Feathermoon and RUtherean because they only have one deck. Although the utility of the Feathermoon boat has always been questionable

Turtle WoW added decks and boat to new towns (sparkwater in Durotar for example), so I guess it's doable.
Top

That is a good point. But Steamwheedle Port in Tanaris is missing a boat anyway so maybe it would be best to get a connection from Booty Bay to there anway OR add two ports to the southern half of Tanaris for both factions for easier access.
Top

SW - Menelith and SW - Theramore should both be a thingy.
Main: Whitemare
Top

That is a good point. But Steamwheedle Port in Tanaris is missing a boat anyway so maybe it would be best to get a connection from Booty Bay to there anway OR add two ports to the southern half of Tanaris for both factions for easier access.

So YET an additional boat for horde and still no real hub in SW. Yes that connection might be a ting. But the priority is Theramore/SW. We now have the biggest port in the world with enough decks for 10 connections, and there's only one boat there, the rest has no purpose at all apart decoration... while there are 3 Zepellins in Orgrimar, come on

ANother interesting human port to exploit is Soutshore
Top

OP's suggestion is superior to what the situation is now. I agree that Alliance has really been hurt with this My lower level toons (basically all) will be hurt because Menethil was a very good hub for them as they bopped back and forth between continents. Not so now.

Good for Horde, Alliance actually went backward, in a sense.

Again, cannot understand any argument as to why it was removed.
Top

I actually think the Wetlands run is a fundamental aspect to vanilla WoW.
Top

I had not even thought to this but I totally agree with you. That is a fundamental aspect of vanilla toon that is now broken.
The other is to hearthstone IF to have the real Menethil hub to travel Kalmindor. I still cant get used to this change after 2 days. I really miss my boat hub, that was fine. And I find the inter-continent travel really boring, while I liked it before.

From an RP perspective the trip to Auberdine from SW would take forever and is such an odd choice if there is a shorter distance from Menethil. People would take the tram to IF and then a flight or tunnel to Dun Argath and if the path to menethil were clear, a trip down there.

A route to Theramore from Stormwind makes a lot more sense. Even if there's the Defias Quest chain regarding a certain missing diplomat, that one could be explained as using a less obvious route for the diplomat far from what they thought would be the reach of the Defias.

An additional Stormwind route could be to Caelan's Rest, though since the distance isn't terribly far it could work like the Feathermoon Ferry currently does. It would also give an opportunity to create an introductory chain for Caelan's Rest since as far as I'm aware there isn't one right now, we just kinda fly there.

Theramore also has three docks, and this one is mostly just a suggestion in regards to a story expansion as well. In WC3:TFT the first Night Elf mission has Maiev visit a Night Elf town on the sea that is admittedly getting wrecked by the Naga, but the ruins of that town aren't to be found in WoW. It could be another small questing hub to be added with the Night Elves trying to rebuild it? There could be a boat from Theramore to there, something that links the Night Elves to Theramore as you'd think would happen post-Hyjal. Some kind of cooperative effort to help each other out now that they're allies.

Another improvement could be a boat from Auberdine to Feathermoon Stronghold. Instead of that pointless ferry that loops around for ages, have the fisherman on the shore charter a rowboat that does an automated trip to the mainland with another fisherman on that side to do the reverse, for a small fee of course, say 50 silver? Most people opt to swim anyway, you could make it slightly faster than swimming. Then use the now free dock on Feathermoon to link up with Auberdine's empty dock.

This keeps the routes sensible and expands them to make the Alliance transports as versatile as the Horde's. Feathermoon is the Alliance's Kargath so it would be nice to also get there for at least the first time without trekking leagues down Kalimdor, like the Horde had to for Kargath.

A Neutral Port Expansion seems to be already in the works? At least from what I've seen. A boat has been added to the dock at Steamwheedle in Tanaris so maybe that is something for further mysteries yet to be discovered.

I was also considering making this post, the alliance has bigger harm then good with the current harbor, even if alliance has 2 boats in wetlands, and 2 boats in sw to the same destination. That will still be inferior to the fact that horde can go from anywhere to amywhere with the zeppelins.
Top